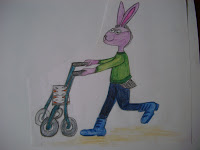 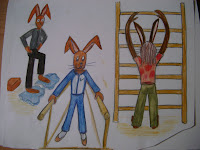 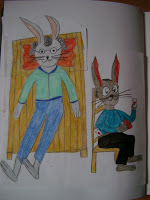 Versuchskannichen by Susie Mallett 2003
Problem-solving
How do you do an hour of “Conductive Education” with someone with cerebral palsy and autistic tendencies, and know that we have achieved more in this hour than is sometimes possible in a whole day?
This is how we did it.
My client arrived very late, first she had lost her glasses and then she lost herself. She eventually found the glasses and eventually found herself and me!

We tried to solve the glasses problem by deciding to have a permanent place where the spare ones are kept, so they are always on hand to help in the search for the others. The problem of loosing oneself is more complex.
My client had thrown away the map I had given her because she thought that after two visits she had surely memorised a few landmarks and would get here without it. She had not considered that the yellow bike, often chained to the lamppost at the end of the street and one of her important anchor marks, is sometimes being used and therefore not there. I am not sure whether she then spent an hour searching for it or if she arrived by pure chance.

We decided that the Satellite Navigation system for pedestrians, which her mum had offered her, would certainly be a good idea. My client initially rejected the offer because she wanted to prove she can do without. We discussed how there are so many people, including those who have suffered a stroke, who are very thankful for this tool to help them overcome the orientation problems that they experience when trying to get back behind the wheel.
Perhaps with this “sat. nav” my client can improve her punctuality that is especially important now as she will soon be entering the “real” world of appointment-keeping, as she will start teaching and will need to get to places on time.

So in the first five minutes of the session we had recognised a problem … orientation and spatial awareness... and we had come up with a few solutions. First to accept the gift of the “sat. nav.” from mum and secondly stick the maps that she uses to find somewhere for the first time into her address book and never throw them away!

With regards to punctuality and organisation we discussed organising the contents of her bag and the clothes that she would wear the night before an early start. In addition we considered the possibility of putting all clothes in the appropriate place the moment she takes them off, to avoid the chaos which prevents her from finding her glasses.

What else did we do?
I massaged aching feet, then we decided together that the shoe inlays should be found immediately and used daily. A bit of manipulation of muscles was followed by some conventional 1,2,3,4,5, and some bending of legs. Then there was some walking-practice, with arms stretched high to prevent the wobbling. Then some more discussion about problem-solving: organising movement, organising self in space and organising personal belongings in space.

At this point I am reminded of the importance of doing homework in the conductive groups. Not because there is no time for things in the evening, but because it is such a good learning opportunity for children to improve their organisation skills and spatial awareness. They learn how to place their bag so they can reach everything easily, they learn how to place things on the table so they keep within their own personal space and they learn how not knock their books and pencils on the floor. Things get knocked off the table because these children do not always watch where they place them and therefore do not know where they are in relation to their own body. It happens at meal times too, glasses get knocked over because the eye/hand coordination is missing.

We had observed that as my client talks and as she walks her head moves continuously from one side to the other. This gives her too much visual stimulus so it is no wonder that she gets lost or cannot concentrate on her tasks. Her homework is to fix her eyes on one object and continue to work on tasks, using this method to keep her head in the middle and to improve her concentration. She realised that if she had concentrated on following a map she would not have been distracted by other visual stimuli and quite possibly she would have taken a direct route to me.

After ten years working together we are a great team, we have both reached a greater understanding of Conductive Education through our work. Recently I suggested that my client should seek advice from the Autistic Society in Nürnberg, and since this time we have come forward in leaps and bounds, developing ideas within the framework of Conductive Education to solve problems associated with her autistic tendencies.

I wrote this posting yesterday afternoon. Just as I was finishing I was bombarded with text messages on my ancient mobile phone that peeped away in protest at the speed at which it was having to work. The following is the “message” I received from the above-mentioned client. If I had known it was coming I probably would not have written my posting, but it is good to hear both sides of the story.
Maybe it is also something which will interest Gill Maguire for the NICE library.
Conductive Education is being an hour late for some important work but still getting more done than usual!
Conductive Education is also drinking coffee or sleeping, instead of exercising, and it is finding suitable jobs for two very unique people. (We often develop ideas on how to find jobs for both a conductor and a disability studies student with cerebral palsy, who has hidden mathematical talents, autistic traits and the evident gift for learning foreign languages).
Conductive Education is finding creativity and orientation in the chaos of autistic dyspraxia, in other words - Conductive Education is good for the entire central nervous system in all of my daily life.

You don’t believe at least a part of this?

Well I am permanently late because I don’t have much feeling for time or space. First loosing my glasses at home and then getting lost in a construction area made me three hours late for Petö, which broke all records. My conductor was naturally a little bit annoyed but she understands and we talked about the problem and its practical solutions, such as planning buffer times and taking mum’s advice, which is buying a pedestrian navigation system.

We discussed how this was conductive (Latin for bringing things together) and education as it made us aware of the potential of change.

We don’t know of any previous studies concerning Conductive Education and autism but we found out how for me to walk straight is partly a question of concentration often defied by autistic over-stimulation. We agreed that Conductive Education is the whole central nervous system in action.
Conductive Education is life, it brings together such topics as teaching, regarding oneself as worthy, managing time, managing talents and weaknesses, following urges of the body essential to survive (having breakfast supplied when I arrive three hours late), pursuing art and culture…..
Freddie H

Versuchskannichen : guinea pigs, as in trying something out for the first time.