On not having to shout 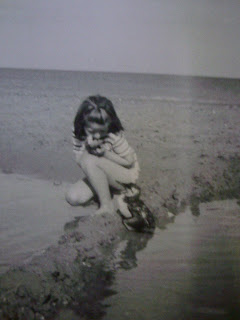 " Quietly communicating" Susie with her guillemot, Walcot, Norfolk, 1962
I was recently invited to a meeting to discuss the future provision of Conductive Education for a group of children who have been attending a Conductive Tagesstätte for the past five years. The group is to be moved to a different school because of lack of space, and staff in the conductive centre, but the parents still wish for a conductive "afternoon upbringing" for their children. We were there to talk about if and how I would be able to provide this for them. We got the work done and came up with a few ideas which we will try to put into practise.
But that is not the reason for this posting, it was a comment made by a parent in this meeting which inspired me to write this. She told me that she found it difficult to understand me, which I found interesting as it had taken my full concentration throughout the meeting to decipher her own broad Franconian accent. I made a big effort to speak more clearly.
The parent continued on the same theme, stating also that I talk very quietly, and asked whether the children understand me. I answered that if the children are listening of course they understand me, that they tend to listen because they are interested in what I have to say and, when they listen, they are not only interested in what I have to say but in how I say it, as I have such a funny-peculiar accent.
Something else which probably keeps children so attentive is that I invite them to correct any mistakes I make, which of course they just love to do.
All the children also know that if they wish they can always initiate a spontaneous English lesson, which often makes listening even more attractive for them,( see my posting from Sunday, 3 August 2008 "The English breakfast and the green dragon").
This wasn’t the end of the matter, the next questions were: "What about when you have to shout? Can you shout?"
My verbal response to this was that I don’t need to shout but my private thoughts were no one ever has to shout. Once again I explained that if I make the activity interesting I do not need to raise my voice (unless of course the activity is actually about talking loudly).
Interested, well-motivated children will listen even when I am whispering. We often play a game to find out how quietly we can talk so that the others in the room can still understand. And who hasn’t had tremendous fun at a party playing Chinese Whispers?
These questions about shouting in order to keep the children's interest got me thinking about something all good educators know and rarely talk about, but which Dr Mária Hári often liked to talk about. She always told us that "poor attention span" and "distractibility" are not necessarily the inevitable problem, the "symptoms" of cerebral palsy that one so often hears about, rather the children are not being interested, and to raise the child’s interest is one of the most important aspects of a conductor’s work. We all know that raising a child’s interest is not achieved by shouting as loud as one can. In one of Dr Mária Hári lectures she said:
"The tasks motivated by the conductor always cause pleasure and invoke attention and the result is the child’s increasingly independent work."

Sometimes of course the children will sense a change in the tone of my voice, usually if it is sad or worried, and occasionally as I wait for an unusually rowdy group to settle and ready themselves to begin work a hint of impatience may be recognised, but I have absolutely no need whatsoever to shout and certainly no wish to do so. Any children who persist in misbehaving soon learn that I will wait until they are ready to begin, and I never need to wait long.
The children get to know me and they learn that they are allowed times to chat with their friends and these become some of the important "in-between times" in a Conductive Day.
A few years ago I worked with a group of teenage girls who all attended the same school but never had enough time in the school day to share stories about boys, clothes and disco. I "stole" ten minutes from the daily programme and created the "giggle programme", when I would "disappear", supposedly to clear away the plinths, and the girls had the privacy that they needed to giggle their way through stories about the latest loves in their lives. It was perfect programme-planning, perfectly placed so that they worked hard in anticipation of the "break" and I didn’t have four giggling teenagers on my hands afterwards! It is not easy to get the attention of a bunch of giggly girls however loud you speak!
In the Petö Institute where the groups could be as large as 20 if not more, I would sometimes attract the children’s attention by strolling the length of the plinths until the noise dropped enough to talk at a normal level. Another conductor-student would start very quietly strumming her guitar, getting louder the quieter it got, another very small woman I knew used to have an old fashioned hand bell to ring, none of us ever felt that we needed to shout, we just had to do what Dr Hári always suggested we do, awake the interest of the children then they would attend to the tasks that they were given.
"The conductor creates intercommunication and an active atmosphere, activates and then directs this level of activity that she has created and utilises it. The conductor’s most general basic aim is the creation of initiative. The crux of the matter is to call into life a truly purposeful energy…"
The quote above from Dr Mária Hári describes what a conductor can achieve by gaining a child’s interest, I could not do any of this by raising my voice and shouting so, to answer the questions once more: Yes the children understand me and No I do not have shout, we all work together and we are all interested in each other.


Notes
Tagesstätte: in Germany school finishes at lunch time for younger children, Tagestätte is the name given to the place where the children spend their afternoons, where they eat lunch, do their homework and may even have time to play.
http://www.konduktorin.blogspot.com/ Saturday, 9 August 2008, School is out for Summer
Franconia
http://www.ohiou.edu/~Chastain/ac/artisans.htm
http://www.fotw.net/flags/de-by-fk.html
Mária Hári on Conductive Pedagogy, edited by Gill Maguire and Andrew Sutton
http://ce-library.blogspot.com/
Posted by Susie Mallett at 22:04