A postscript to On not having to shout. 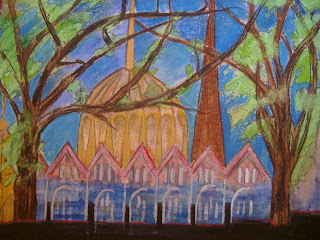 Aspects of Budapest by Susie Mallett, 1992

I was recently given a booklet and in it I read some articles written by parents who were bringing their children to the Petö Institute or “the Petö” as some of them, even as early as 1986, called it. (see Conductive Education World, "Terminological exactitudes. Can we begin to agree on some basic terms?")
In this booklet, called quite simply Conductive Education?, I came across an interesting paragraph that could have been specially written as a postscript for my recent blog “On not having to shout”.
Three weeks into a six-month placement a parent asked the leading conductor how his young child was faring. The reaction was positive and the conductor added that the child is having difficult concentrating. The parent immediately responded with questions asking what the family could do to remedy this. The conductor’s reply, quite matter of fact as we know from Dr Mária Hári that it is: “No no it is not for you. It is our problem. We must motivate her.”

The parent went on to state that parents who have taken their children to Conductive Education placements in both Hungary and elsewhere, recognise the difference of approach that this statement represents.
As all conductors know motivate a child and the sky's your limit. At just this moment I am searching the contents of my flat for all I can find which could aid me in motivating a teenage girl.