Something from the BBC for the fourth Advent Sunday and a couple of Bits-in-Between for conductors! 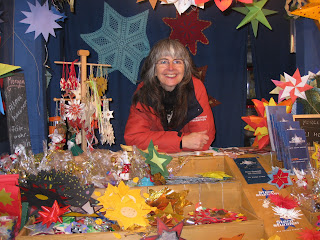 Children-in-Need star stand, Nürnberg
16th December, 2011
A bit of rap
http://www.bbc.co.uk/news/uk-england-devon-16236129
It made me smile out loud!
A bit of sparkle
On Friday evening I was working, as I have done for the past ten years, on the stand selling hand-made stars for child's charities.
Gale-force winds were forecast, at midday the  city council were considering closing the Christmas Market in fear that it would be blown away. It stayed open and it rained a lot, but the wind never came. The people did not come either kept away by the storm warnings.
It was s till fun and despite the awful weather the takings for the various charities was on its way to two thousand Euros for the day.
And a sprinkling of snow
We could have done with the icing sugar snow on Friday evening to create a romantic atmosphere to attract the visitors, instead we have it today while put the finishing touches to the Christmas cards  beside the now four candles and decorate my tree.
Posted by Susie Mallett at 13:07