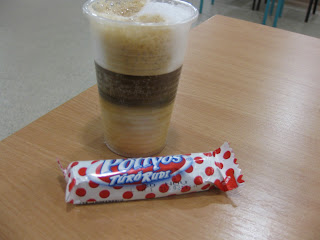 A favourite "bits-in-between" at the Petö Institute, Türö Rúdi and cappuccino
Despite my never-ending list of conductive posting that are floating around in my head or in note-form in my notebooks, I just have to write a bits-in-between-for-conductors piece.
I love recording first-time experiences. I actually have a book where I try to remember to write them all down.
Sometimes I make a point of actually doing something that I have never done before just because I have never done it before and that is now I got to be at a Tupperware Party on Saturday night.
Such parties were a part of my growing up. I think that there was even one at my house once when I was very little. Although I cannot imagine my Mum’s doing it more than just the once! Even so Tupperware for mixing Yorkshire pudding has long been the most used item in the family kitchen in Norwich.
The joke’s on me
For me and my art student friends in the 1970s, Tupper-parties were a standing joke, but really, deep down, we would have loved to have given one, or even just attended one, only because of the anachronistic qualities we saw in it.
They did not fit into our life-styles any more than the huge art school that we attended fitted to the small Surrey town where it was situated.
A week ago I received an email from a friend that said:
“On 3.12 I will give a Tupperware Party at mine. Sounds odd, it is too, somehow, but I am curious about it!
Do you want to come? It will be a pure ladies-evening and certainly has the potential for being very funny!”
It appeared that she found the Tupperware Party phenomenon slightly peculiar too so I thought this is probably the opportunity to try it out.
So I went
And while I was there I did an awful lot of observation!
A brand new world opened up before my eyes, a world of plastic boxes.
I was amazed at the amount that some people knew about Tupperware and how much interest they can have in containers for storing food.
It is an interest that has been sustained for fifty years in Germany and since 1946 in America. I questioned how the business can survive when most items have a thirty-year guarantee. I am still using the metal cheese-grater that my grandmother bought when she set up home in the 1920s. It is metal not Tupperware, it had no need for a guarantee, it is not vivid purple or bright green and I have no intention of replacing it with another.
I remember from my childhood, a Tupperware salad bowl for picnics and a salt and pepper set. They were in pastel greens and yellow. At Saturday’s party the kaleidoscope of colours was something out of this world, so gaudy, enough to put me off my food. Apart from this it was all incredibly expensive.
Another first
I have never owned a piece of Tupperware in my life but that will change soon, as each guest will receive a small, very small, fluorescent-pink lunch-box.  Perfect for keeping pins, beads or wobbly eyes in!
I still do not understand the attraction of Tupperware but if I was a mother with a family of six I might think otherwise.
I went with the purpose of finding out about the attraction of plastic boxes and also to purchase a Spätzle-maker for the children at work so we can make our own Bavarian cheese noodles/dumplings.
Attending Tupper-party is an absolutely brilliant thing to put on the Firsts list. I had such great fun watching people get excited over a plastic box.
There was of course more than just plastic boxes, there was a man, yes a man, there to demonstrate how to use some of the tools. Our male demonstrator was also a professional cook and had a good sales pitch because he not only knew how to use the tools he also knew how to cook. He really could tell us which items were good for what purpose.
We tried out the Spätzle-maker and tasted the products and we tried out an odd roller used for making lattice pasty.
These are the gadgets that caught my attention, rather than a lime-green, multifunctional lunch-box or a cerise set of tableware dishes!
Better things to party over
Thinking about all that oil being pumped out of the earth, to produce millions of plastic containers in the most poisonous-looking colours imaginable, convinced me that I am better off keeping my grandmothers cheese-grater until the end of its or my life.
However, my friend had been right, it had been quite good fun discovering together what I Tupperware Party really is and it was in reality not much different to the pictures from the 1960s that I looked at online. In the end we decided however, that next time an underwear party might be even more fun!
Notes
Tupperware -
http://en.wikipedia.org/wiki/Tupperware
Posted by Susie Mallett at 21:15

Labels: Bits-in-between for conductors, My life