Where is the best place to be when digging a hole? 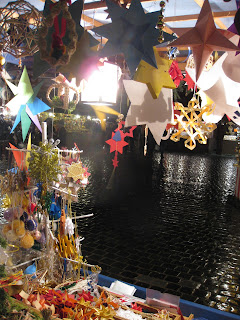 Not a soul in sight at 6 pm on the last weekend before Christmas!
Quick sand
Whilst on the tram on Saturday with The Guardian Weekly I read the leading article:
Year ends on grim financial note, by Larry Elliott and David Gow
The article tells us that Mr Lyons, an economist, identified, as one of the dangers in this world wide economic crisis, “…the tendency of those in charge to carry on digging when they are in a hole.”
The hotline
How thankful I was this week that I only had to make a phone call and the person in charge got everyone out of the hole that they had been digging around in all week and quickly filled it in!
Oh what a different world it would be if it were so easy everywhere.
Eyes like a hawk
In my own small world I can hold my head up and keep my eyes peeled. I can observe and react appropriately, and, when possible, do something to prevent myself and others from digging themselves deeper into problem situations.
Back to being an ostrich
As for the wider view, and as far as the Eurozone  and the rest of the world are concerned, I think I am best to keep my head buried in the sand and to keep on hoping.
I do not think I will be able to get that deep hole filled in with just one phone call!
PS
Just after I had written, this while on the underground  after the tram, I spotted a picture on the front of a trade-union newspaper that I tried to capture with my camera but I missed half of it. I quickly noted what I remembered, but you can view the real thing by artist KCEB, here: 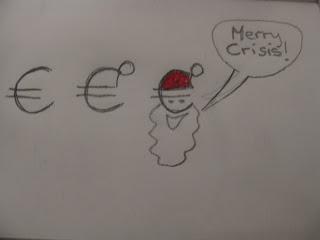