Remembering that day not so long ago 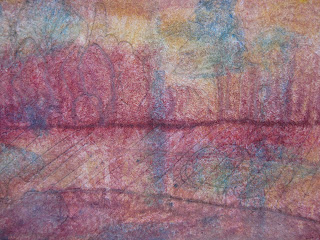 "A misty window on the world" by Susie Mallett
13th August 2011
13th August 1961...
... a summer's day when some families were separated and some lost their jobs overnight
I remember well the day that the wall fell in Berlin. I was in Budapest at the time and some of my colleagues spontaneously jumped on a train to experience the celebrations first hand. Now I often wish that I had behaved just as spontaneous and gone with them. That was almost twenty-two years ago.
Today the Germans are remembering the day that the building of that wall began, they are not celebrating but they are not letting the day go by forgotten.
The Berliner Newspaper says:
Am 13. August jährt sich der Tag des Mauerbaus zum 50. Mal. Damals verloren Menschen ihre Freiheit, ihren Arbeitsplatz, viele Familien und Freundeskreise waren von einem Tag auf den anderen auseinandergerissen, Unternehmen gingen ein, gelebte und gewachsene Stadtstrukturen wurden zerstört. Wir blicken zurück auf die geteilte Stadt.
On 13th August we see the 50th anniversary of the day the building of the Wall began. At that time people lost their freedom, their jobs, many family members and people forming circles of friends were, from one day to the next torn apart. Businesses went bankrupt, inhabited buildings and notorious sites were destroyed. We take a look back on the divided city.
https://www.berlinonline.de/berliner-zeitung/berlin/50-jahre-mauerbau/
The BBC write online that the major of Berlin, Mayor Wowereit,  said that the capital was remembering the "saddest day in its recent history".

Herr Wowereit went on to say:

"It is our common responsibility to keep alive the memories and pass them on to the next generation, to maintain freedom and democracy and to do everything so that such injustices may never happen again".


http://www.bbc.co.uk/news/world-europe-14515344
This is the way the Germans do things these days when remembering the recent past, with quiet, formal gatherings, today with a memorial service and a minute’s silence to remember the event and the people who died attempting to cross the wall during the following twenty-eight years.
The Germans are determined that such sad events in recent history do not get forgotten.
Notes
http://www.telegraph.co.uk/news/worldnews/europe/germany/8699626/Germany-marks-50th-anniversary-of-Berlin-Wall.html
http://www.rferl.org/content/germany_marks_50_years_since_berlin_wall_built/24295861.html
Posted by Susie Mallett at 16:53

Thanks for reminding me of those distant days.

I remember Berlin in the days before the Wall and the strange situations in the four-power city. Of course, it was so easy for me, I came from one of the four powers.

One of the strange situations related to the U-Bahn and the S-Bahn. Both served the whole city but the S-Bahn was run by the East and the U-Bahn by the West. Routes of course had to cross between one sector and another, with frequent checks controls by frontier police.

In the very hot summer of 1960 I came back home from the Crimea, via Moscow and Berlin. It was very, very hot and the many virtues of Soviet railways did not extent to the ablutions.

We were hot, filthy and hungry when the train from Moscow terminated in Ostbahnhof in the Soviet zone. We went straight out of the station to the arches underneath and wolfed steak and chips in a workers' cafe. Then back upstairs to take the S-Bahn into the West.

The border station on that line was Friedrichsstrasse where the train stood and waited for some time while East Berlin's finest worked their way along the platform checking on who was on board. One look at the grubby sweaty pair half-way along was enough, and three big lads escorted us briskly to an unfriendly little office at the end of the platform.

It was just like in all those films that I had been brought on. And like at the cinema, not at all frightening because I had my pass out out of the situation ready in my pocket. In the little office at the platform end, an officer had something intimidating to say and started saying it, sounding just as they did in all those films, but I did not understand a word. In fact I had only one sentence of German, so I said it, 'Ich bin Britische', and fished him out my dark-blue passport with its glittering coat of arms.

And out we were marched, back along the platform and shoved on to the still-being-checked train. This was soon off to Zoologische Garten, that in those days served as the West Berlin's main railway station.

And straight out for a pink Berlinner Weisserbier (is that how it is spelt?)

A trivial personal memory. Not my only contact with the security services of the old Soviet Bloc having in common with the others that I personally was really pretty safe from its terirble force, I knew that really no harm would come to me and with one bound I should be free.

I also knew that for countless millions the story was different, and tshowed no signs of there eving being a way out. Whole populations were in it, for life. Without forgetting the enormous positives of those societies (including of course securing what we now know as Conductive Education), the Germans and others have many terrible things to remember with quiet dignity.

Thanks for bringing this to the attention of your English-speaking readership.

Thank you Andrew for taking the time to describe in such detail your experiences on both sides of the Wall, with the insurance of that blue and gold book in your pocket.

This is not at all a "trivial personal memory". The papers this weekend were filled with personal stories told from both sides of this dividing wall.

It is from such stories that readers get an expansive view of what life was like in the East and the West at that time.

Yes, it is true that most of the stories I read this weekend had been written by people who did not feel the assurance that a British passport in the pocket could give one at that time and much later too.

Your story adds to this wealth of historical and social information.

I am not a Weizenbier fan but Wikipedia tells me:

"Berliner Weisse and Lambic -
a minor variety of wheat beer is represented by Berliner Weisse (Berlin White), which is low in alcohol (2.5% to 3% ABV) and quite tart. Although it can be imbibed by itself, enthusiasts often add sweetened syrups of lemon, raspberry or woodruff herb into the beer."

You can read more about this Berlin beer, and find photographs too of the pink and green varieties, here:

That's it, in your link, the pink one. It's even in the very glass! Just looking at the picture, I taste again its icy tang from that hot, stuffy day under Zoologische Garten Bahnhof over fifty years ago.

And amazing to say, I have never seen or tasted it again, from that day to this, though in a way I have tonight.