Painting by feelings and emotions versus painting by numbers 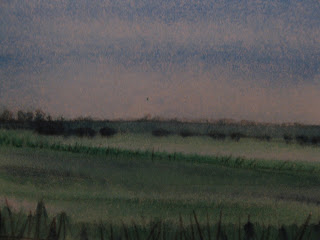 "Pure emotion - no numbers to follow here"
by Susie Mallett, July 2011
Painting should be made from the soul not by numbers
That is what one of my artistic clients told me last week.
He went on to explain to me that he had registered himself for, and attended, a painting course that took place after work one evening and he was and still is very disappointed.
He had thought that he was going to be able to express himself on canvas, to paint with feeling and emotions as he is used to doing. And, he added, he thought that he was going to learn something.
This young man loves to paint. He has learnt about mixing colours, about using different techniques and types of brushes and tools to achieve various effects to produce the images he is after. He has also learnt how to take a step backwards and view is pictures from afar to consider if they are complete or not.
This young artist has had three exhibitions of his own work and is working on a collection for the  fourth one.  He had hoped when he signed up for the “around the world” evening class, with a visiting artist, that he would receive some more usefultips to use in his own work.
It is part of the ongoing development of this client, and a huge step forward, that he is now able to decide for himself whether he wishes to enroll for something to do in his spare time and to decide alone what it could be. It is an even bigger step forward in his development that  having chosen the painting class that he was then able to be critical about what was on offer.
And critical he was
In fact he was very critical:
“I thought I was going to be taught something and all I was asked to do was to colour in a pre-drawn picture.”
He had been given a picture of the world, drawn on a canvas, and each person participating had been asked to colour in the same picture. I am not sure  if it was exactly painting by numbers or whether exactly the same colours had to be used, but even the fact that the picture was pre-drawn, and everyone did the same, was enough to deter my client from signing up again in the future.
He said that to make matters worse the canvases were tiny and the brushes too big for his personal needs to fulfill the task. He was also unhappy with the medium that they were given to paint with.
Teaching and learning
The outcome of this unsatisfactory experience, and our subsequent discussion, is that my client plans to offer our, (his and my), services to the group the next time they plan a painting class. He  has decided this because he wants to learn something the next time, and he wants his fellow class members to learn too.

He wants them to learn about colour, about mixing paint and how to use brushes, palette-knives, sponges and stamps to apply paint, just as he has done from me in the past. Not only does he wish that these practical things are taught but also how to form shapes and make marks that when put together will allow them to express whatever ideas they wish to in the images that they produce.
My client does not wish to join a group of twenty people again who all have to colour in the same image with the colours stated on the canvas. That is not his idea of painting at all.

We will see if we get invited. I am glad that I am included in his team.
Posted by Susie Mallett at 17:54

Is this an allegory for what some places deliver under the name of 'Conductive Education'?

Do you mean by your question above that in your opinion the art class that my client described could be “an allegory for what some places deliver under the name of ‘Conductive Education’ “?

When I wrote this that was not my intention. I was reporting on one of the many conversations that I enjoy with this client and hoping that I could describe indirectly the hard work he has put in to reach this stage of his life. A stage in which he is able to make critical choices. I wished to show how he has learnt that he has a right to question if he is getting value for his money and what he expected.

I encourage him to do this with the conductive services that he uses too, and to always state what it is that he expects from them and to ask if this can be offered.

I was not thinking about allegories as I wrote. The art class is certainly not typical of the conductive education that my client has experienced over the past fifteen years nor of the conductive lifestyle that he lives, hence his disappointment in it when he attended.

I am interested to know what you think. Do you think that it is?

I take your client's experience as a epitomising a clash of two quite distinct approaches to teaching/learning (and to many other things beside). These are not necessarily mutually exclusive, indeed good pedagogy should surely always ensure a sensitive blend of the big picture and its constutuant parts – and be infused with purpose and meaning at every level. It sounds that your client, however, was experiencing an uncompromisingly mechanistic approach to something called 'art', while his previous experience of this word had let hin to expect something rather more molar, 'holistic', enbued with meaning and spirit.

Over the years I have come across some truely horrifying goings-on under the rubric of 'Conductive Education' – people providing a practice made up of a suite-everybody 'task series' or two, played out on bits of bare, stock furniture, all to the accompaniment of the self-same monotonous chanting... and, er, that's about it. Non-conductors doing this, following misguided 'principles of CE', I can sort of forgive – though whyever, I had to ask myself, had people's common sense not told them how daft they were behaving? Less forgiviveable was it when even a vestige of this approach hailed from a conductor.

I don't get around much any more, thank goodness, and I would be delighted to feel assured that this sort of thing never happens, and that doses of something called “Conductive Education” are not sill being meted out in such a mechanistic manner in 2011.

I enjoyed reading your real-life story wholly at face value. I guess that it happened in Germany. Had this hapened in the UK I should have rolled my eyes and shuddered at yet another example of the triumph of 'training' over education – and ranted accordingly. What it signifies in Germany I have no idea and I was happy to regard the episode as no more than your client's stumbling in all innocence upon an aberrant 'art' class. Then I realised that the conflicting approaches involved here in fact represent something more universal, to which this your tale, to me anyway, offers vivid illustration.