The Berlin Wall, a PS 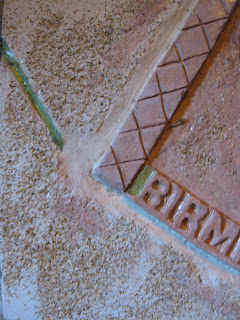 "Ceramic tile" by Susie Mallett, 1985
A friend of mine, Emma McDowell, wrote to me after reading my posting about 13th August, 1961 when the building of the Berlin Wall, the Mauer began.
http://www.susie-mallett.org/2011/08/remembering-that-day-not-so-long-ago.html
Over the past few years, since I have my blog, Emma often writes to me after she has read something that she likes or if something prompted one of her own particular conductive memories or experiences from her life. I have her permission to post her comments on my blog if I feel that they would be of interest to my readers.
It seems so long now since that anniversary of the building of the Berlin Wall, a day that was given just the right amount of respectful media attention in Germany. I fear that this comment will get lost if I post it on my own commemorative posting, so I will put it up here as a posting in its own right.
This is what Emma wrote to me about her life in August 1961:
As for the Mauer: well, I could wear my son’s Tshirt that says:
“How you can tell that you are getting over the hill…
…you don’t read about history, you remember it”.
Yes, I remember exactly that August (fifty years ago), when the Berlin wall was built. An East German pen-friend from Leipzig, Gaby, was staying with us in Szeged (Hungary). We were “Tauschkinder” (exchange-students), Gaby and I, our families planned it all out.
After a brief correspondence Gaby came to us first, for six weeks that summer. It was a big sensation for me and my young sister to have somebody staying with us who could only speak German! And at fourteen she was (or so it seemed to us) quite a sophisticated young lady, too, with beautiful Hochdeutsch. (She spoke Sächsisch at home, of course.)
After their less sunny climate, she really enjoyed the Szegediner Hitze, the heat of Szeged, and all the teenage fun at the riverside, while my spoken German came on quite well (I had already known some German, and was certainly well versed in the grammar.)
Later I spent four complete summers in East Germany which I got to know very well.
That first summer, so, it must have been 1961, Gaby’s parents wrote to her about the events in Berlin – the Mauer – cautiously, in a letter. She was upset.
I knew very little about politics in those days, except what we all experienced in my own country. By that time it was somewhat easier for Hungarians to travel abroad, but the East Germans really felt imprisoned, with most of them having relatives, or close friends “drüben”, (in the west).
Thank you Emma, sorry it took me so long to post this.

There is aother interesting comment on the original posting about experiences on both sides of the wall.thank you to my readers for telling me their stories. Please keep them coming.
Posted by Susie Mallett at 00:35