A good read for the train 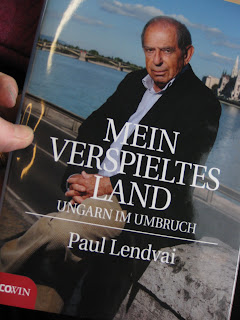 Mein verspieltes Land, Ungarn in Umbruch by Paul Lendvai
It is hard work for me to read a book about politics for fun when it is in English, it is even harder work to read one in German about Hungary, but this one is so interesting that I am giving it a bash.
Why?
I lived in Hungary for four lovely, long years and visited the country at least twice each year for the following sixteen years. Since 1989 the majority of my work colleagues have been Hungarians.
During the past twenty-two years I have got to know the country and the folk quite well, perhaps better than I know the country and its people where I now live.
The search that led me to Hungary
Perhaps all things Hungarian interest me so much because it is there that my journey took me as I searched for direction in my pedagogic work. It is the land where I discovered that through conductive pedagogy it is possible to change, to be brought up conductively and to learn to live independently. It is where I learnt about living conductively and how to teach others how to do so. It is where I learnt so much that would help me as I continued in my work helping people to transform what had been dysfunctional lives to functional ones.
My fascination with this country began the moment that I arrived and was taken on a journey though Pest to Buda, the bus driving all around the houses delivering fellow students at their flats until I was dropped off in Zöldlömb, where I lived for the next four years. This fascination continues to this day, fed of course by my daily contact with Hungarians and made easier by speaking the language.
The book
Recently I read this article online:
http://www.bostonreview.net/BR36.4/paul_hockenos_hungary_europe_right_wing_extremism.php
I do not regularly read a daily newspaper in Germany and had not seen anything written about Paul Lendvai’s book when it was first published in German, but I was hooked when I read this review on line and immediately ordered it at the shop-on-the-corner and two days later I had a copy in my hands.
Now I am doing my best to read it. Having read in the Boston Review that a record number of copies, for a non-fiction book were, sold in Hungary, but the majority of them have not yet been read, I am determined that however difficult it is I will read it through to the end.
For this reason it is my train-book. It is not good as a tram and bus-book, those journeys are too short and the book too difficult to understand to read on short journeys, I would end up reading the same pages over and over again. No, this is certainly a book for longer journeys. I need an hour or two to get into the swing, to re-read some sentences and to enjoy the success of getting through another fifty pages.
Step by step, though Paul Lendvai’s clear description of complicated political situations and his interesting portraits of old and new political figures, I am beginning to understand what has been happening in the political world in Hungary over the past twenty two years, since I first got to know the country. This is an account of the changes in Hungary’s political system seen through the eyes of a Hungarian living and working in Austria.
If I was politically more capable I would be trying to from links between the recent history of Conductive Education and the Petö Institute and the ups and downs of recent Hungarian politics. This is not really my field, so this job I will leave to others who can do it much better than I could, and I will just give you the tip to read this very interesting book. It is available in German and Hungarian, and other publications by Paul Lendvai are also available in translation in English.
Notes
Mein verspieltes Land, Ungarn in Umbruch by Paul Lendvai, 2010 – published by ecoWIN, ISBN- 978-3-902404-94-7
Boston Review -
http://www.bostonreview.net/BR36.4/paul_hockenos_hungary_europe_right_wing_extremism.php
Posted by Susie Mallett at 23:07