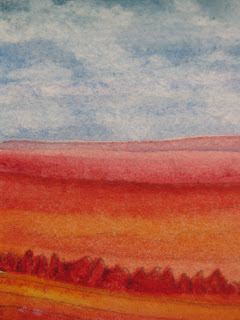 The return of summer by Susie Mallett, 2011
It was a really good feeling that I had, as I was “writing” this posting on my bike on the way home this evening and realised that I had actually written it several times before. I do not of course mean that I have been publishing the same posting over and over again all these years but that I have told a similar story quite a few times in several different ways.


The wanderer returns is an apt title, even though the young client who is with me this week has not actually returned for good. He still lives away from home in order to attend his chosen school, but I do expect that we shall see more of him over the next few years.


Fifteen years ago this little boy was, I suppose, our own little Harry Potter, at a time before anyone in Germany had heard of the real Harry P. Our Harry was really bright and always full of fun, telling jokes and having us in stitches, and he could then, and still can, talk the hind leg off a donkey!


One day all those years ago when he would not stop talking my colleague, who Our Harry told me today was always his favourite conductor, opened the window and asked the dustmen to come over and take him with them. I can still hear his giggles when they obliged (well not really, they did not take him away but they showed willing by bringing the dustbin right up to the window!)


I discovered today that Our Harry was not even born when I arrived in Germany in 1993. In 1996, soon after conductive work began in Nürnberg, Our Harry was two years old and was one of the first littlies who attended the early sessions with their parents. This was run by a colleague who was running the same kind of group here this very morning. He then went on to the Kindergarten group at the local school, run by my colleague, Our Harry’s favourite conductor, who is now in our integrated kindergarten group, then later as an eight-year-old he was in the after school-group that I myself had worked in for many years.


At ten years old this lad made the decision, of course together with his family, that he would leave home, go to boarding-school some two-hundred miles away, so that he could attend a school where he could take O- and A-level equivalents. He is still living away from home, is very successful at school, and hoping that he will make the grade that will take him off to study at university in Berlin in two years’ time. As I said, the wanderer has not returned for long.


I realised today how lucky our old clients are because, when they decide that they want to return to conduction after a while, for whatever reasons, they are welcomed back by familiar faces. In the case of Our Harry there were three familiar faces today. All three of the conductors who worked with Our Harry, during all three of the phases described above, where actually there at work today, (and that, during the first week of the school holidays, is quite a feat!)


Our Harry and I are working alone but as the Kindergarten children are going off slowly one-by-one on their hols, my conductor-colleague was able to come across to help me today and offer us some very valuable advice, and of course to reminisce by recounting funny stories and chatting for long enough for our Harry to remark:  “She is cool!”


Despite my grey hair he also told me that he finds me cool… “but crazy, too”.


Later Our Harry remarked that he thought that I have a lot of respect for the colleague who helped us. He is right I have and I asked him how he knew. He said he knew because he could hear it in my voice.


That is really good observation for this sensitive soul, a seventeen-year-old young boy who likes techno-music, discoing, computer wrestling, and watching the Klub, Nürnberg FC, play football every home game. He also loves communicating with people.


Our Harry had phoned me a while back, to ask whether there would be any possibility of working with us over the summer holidays. He told me that his legs had been operated on recently and that he felt in need of some conductive input during his long holiday to get him moving again. It is very difficult for him during school time to find enough time for rehabilitation. We have got a week together now and perhaps there will also be time for a few sessions later on in his summer break.


Our Harry had first decided on working a very long, six-hour-day with me. This we reduced almost immediately to five as we soon realised that after six hours there would be no energy left for him to get himself home! Probably not for me either.


We are both very happy with the work that we have done so far. We have achieved quite a lot already in the short time that we have had together. Standing with his own muscle power and sitting somewhere other than in his wheelchair where goals that we have achieved after just two days and will now be improved upon and added to over the next few days.


Our activities have also included cooking lunch together and sorting out the English pluperfect tense, with thanks to my wonderful book The Queen’s English. Tomorrow we will be looking at subordinate clauses and the Oxford comma, while we cook a typical English breakfast of egg, bacon, sausages, fried bread, tomatoes and mushrooms, and what he calls “black tea”.


I will probably need to write another separate posting at some time in the future to expand on the subject and to collect my thoughts together on long-term conducting.


I have been so lucky to have accompanied so many of my clients in their conductive upbringing right through to young adulthood, observed and assisted as they have grown up in a conductive family and then have gone on to live conductively as young adults.


Not only do I work with clients, young and old, over many years, I also meet and re-meet teachers, and physiotherapists, grandmothers and sisters, swimming teachers and riding instructors, and of course mums and dads. There are also other conductors and conductive centres where I have worked that have also helped to create this growing network of people.


These are all people who I have come in contact with again and again, some more often than others, but all holding a valuable spot in this mass of information that seems to have recently drawn together, without me really noticing how it has grown over the years. It is like a spiders web full of information and connections to use in my work.


This network expands from Nürnberg to all over Bavaria, then throughout Germany and out in to the big wide conductive world. It is like a fragile, interconnected mesh of spiders’ webs, or perhaps like one of those spiralling tunnel-webs that seems to have no end. With very delicate threads that can easily break but when brought together are tough enough to provide strength and stability to our work.


The Queen’s English by Bernard Lamb -