Has anyone else got one of these? 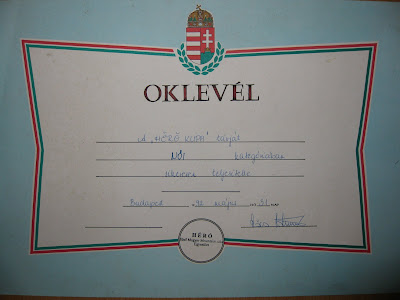 Keeping busy, both then and now

When the computer doesn't work there are always other things to do: activities like sorting through portfolios, on the look out for pictures for postings!
I found this certificate amongst the paintings that I did in Budapest, which have not seen the light of day since I did them. I did quite a lot of early-morning painting in 1992/3 as a bit of light relief from work at the Institute. I also did a lot of cycling.

I received the certificate above from the Elsö Magyar Mountain-bike Egyesület, The First Hungarian Mountain-bike Club, for completing one of the last mountain-bike races that I took part in in the Buda Hills.

At this time there were four women competing, three professional road racers and me, and about fifty men! Not all the men completed the course but all four women did. I was a lap behind the profis but that made no difference I was happy that I made it to the end. It was always pretty tough, especially in the winter, but it was lots of fun.

I have a photo somewhere!

I always got a small prize to go with my certificate. I always came fourth, as there were always only four women! There were not many mountain-bikes in Budapest at the time and even fewer women riding them.

I was always happy to just reach the end of the always gruelling courses, I didn't need a prize, but it is really nice now to find the proof that I made it. It was quite an achievement for me, as even then I wasn't very young and I was competing with the professionals!

Ready for spring
I still have that bike that I bought in the first Hungarian Mountain-bike shop. I have not used it since I bought my flashy-but-no-longer-new one, but it is packed with too many memories to be disposed of. It is cosy in the cellar ready for visitors to use!
My no-longer new flashy bike is still cosy in the cellar too but, with the disappearance this weekend of the last heaps of snow, and with the temperatures at least ten degrees higher than they have been, I will fetch it out tommorrow, along with my cycle gear.

I haven't been on my bike since Christmas Day when the snow started falling. It is time to get my legs turning again and the cobwebs blown out of my brain.

I will miss the reading and the blog-writing on the tram but I will enjoy communing with nature again. I will also enjoy having sixty Euros a month extra in my bank account.That is the price of my monthly travel card, and my prize for cycling again!
Posted by Susie Mallett at 20:24