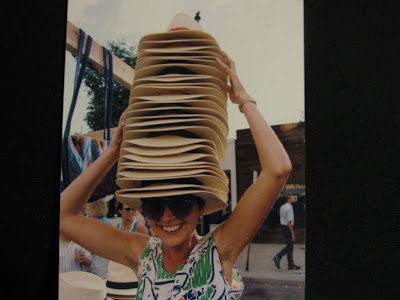 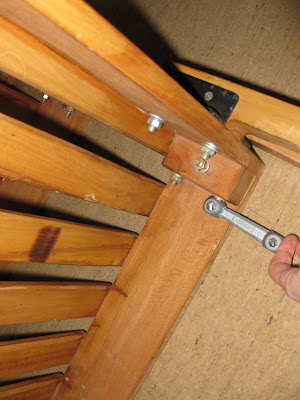 Actually it was me, with my bike spanner and a bit of power in my skinny elbows.

For the first time in over twenty years I had a client with me yesterday who was worried that the plinth that he was lying on was going to fall apart beneath him.

He really was nervous and, despite much assurance that not even one of the twenty bolts holding the plinth together had fallen out, I couldn’t get him off the subject.

I must admit that the plinth was a little bit wobbly and, when you have trouble with balance anyway, then it is certainly a bit disconcerting to have a plinth moving beneath your body.

So I asked him to get off the plinth. Out came my bike spanner, from the set kept at work for emergencies, and I set to work tightening up all the bolts.

With less than a quarter of a turn on each bolt I was able to tell my client once again that he had not been in danger of collapsing on top of a pile of fire-wood. But as he once more expressed he had nevertheless felt very insecure while turning over. I can’t say that I blame him!

That was not the end of it. Before we could get on with our work my client wanted to know who was in charge of the furniture's TÜV (MOT).

I actually have no idea and whoever it is was not there on this particular morning, so on this morning this person was me.

I decided that I would keep the MOT-hat on all day. After work I borrowed screwdrivers from the Kindergarten and, as well as doing all the plinths, I did an MOT on all the stools too.

Unfortunately the ladder-back chairs are glued not screwed or bolted, so when they get wobbly they have to go to the carpenter to get taken apart and re-glued. I have not quite acquired that hat, not yet.

After the lying programme with the stroke group I asked them if they had felt any different lying on the plinths today than on other days. One immediately answered :
“Yes, I didn’t wobble”.

I had no idea that the plinths wobbled, even though I push them here and there a million times a day, take tea-time naps on them on Tuesdays and often do the lying programme on them. I suppose that, because I can move more easily than my clients and my balance is relatively good, I don’t notice the very slight movement (quarter of a turn at the most on each bolt).

Obviously, more than just the one client had noticed, but until today not one of them had ever mentioned it.

Perhaps because of the cold, dry snowy weather and the hot and even drier atmosphere in the room the wood has been working and the bolts have loosened only recently.

Whatever the reason and whoever the official MOT man is doesn’t matter anymore.

The plinths were wobbly but not anymore because the handy-man came with a bike spanner.
Apologies to my clients for any discomfort caused and I hope that they will tell me earlier next time.
Posted by Susie Mallett at 23:09