Paintings at an exhibition 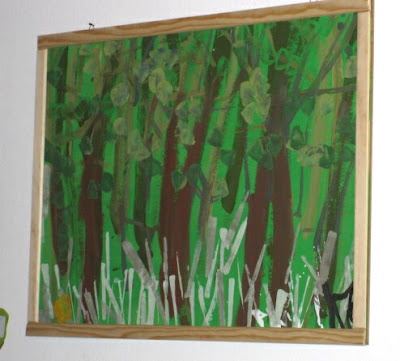 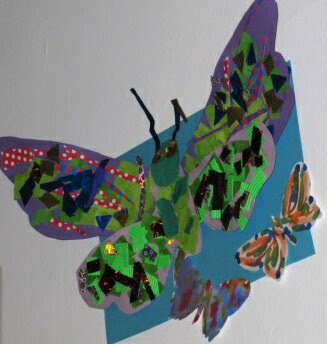 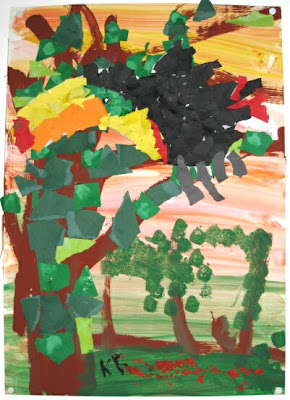 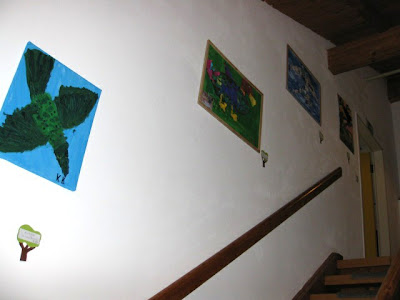 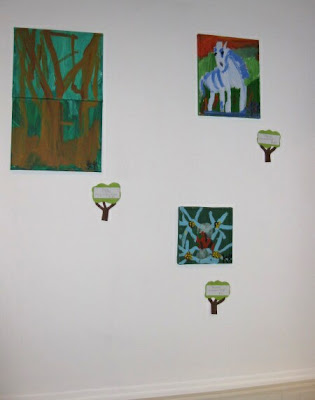 "Hockneyesque trees, an after-Chagall horse ,and an original KK bee"

Action stations
In the TWTWTW week I finally got to see the exhibition that my art-therapy client and colleagues and had put together just the day before I left for England in September. I described the last-minute action and amazing cooperation of various colleagues in an earlier posting, "The Spontaneous Vernissage"

I missed the private view but have been told by all of those concerned that it was a great success. Several people told me that my client had felt very proud to have his work hanging on the walls and he gave everyone present the feeling that he was thoroughly enjoying himself. My client, diagnosed as autistic, also said a few words of welcome at the private view, standing beside his father and his social worker.

It was not until TWTWTW, that is two weeks ago now, that I finally had the time to go to the BUNI-TREFF to have a look for myself. It was quite impressive. The exhibition space is situated in the café and extends up an open stairway stairway. Large paintings hung on the stairway can be viewed from below quite easily. I was really impressed by how the paintings had been framed by the "Man Friday" at the Verein. Just a sheet of hard board and a thin strips of wood attached with double-sided tape. A a perfect frame for the almost three-dimensional pieces behind glass would have lost some of their energy.
A wholesome sight
I knew all the pictures. Most of them had been painted in our art-therapy sessions and I had seen them en masse as we delivered them at the Buni-Treff, but somehow they looked so different on the walls. They were no longer separate items, they had become a unity. The whole of my client's work to date. It really was quite impressive to see and, while for me it was a good feeling to see them like this, I think for my client it must have been even more satisfying.

I have only once in my life exhibited a group of paintings. It was a joint exhibition and only for one day, at a congress, but nevertheless I remember the feeling of satisfaction that I had when the set of paintings was completed and hung on display to the public. My client most certainly felt this too, although unable to express it in words. I could see his pleasure in his face and, as my colleagues reported, it was also obvious in his behavior at the private view.
An afternoon out and about
It is a long time now since my Indian-Summer holiday in England that followed the blitz of organizational action for the exhibition. This week the exhibition came to an end as it was time for the next artist’s work to be put on display. We juggled appointments for the three of us, me, my client and the same Man Friday who framed the pictures, so we all could go together, with a small van to take the pictures down from the walls.

We added another new experience to my client's gradually richer and richer life, we made more connections for him in a gradually widening social world, and at the end we all sat down for a coffee together.

All in all the experience was a great success. My client experienced a situation that not many artists are lucky enough to be in, a solo exhibition. He had done everything that he needed to do, with aplomb. We all got to know a few more people, kindred souls who are now willing to work on similar projects with us.

In this case a little imagination, a lot of pulling together and a few spontaneous decisions worked wonders on the lives of several people, not forgetting all those who were able to view the paintings.

I nearly forgot them!

When they were hanging it was interesting to see that the underlying interest that my client has in nature really did shine through.
There were a variety of birds, there were plants and insects and trees. What I enjoyed most was the brightness, the humour, the sense of fun displayed in the paintings and collages, the liveliness of the colours and the textures of the materials.

We have decided that, instead of leaving these beautiful works of art in a box, we will exhibit them in or work place until we find another gallery space to put them on public view.

A big thank-you to the Buni-Treff, the boss at the Verein and my two colleagues for all their help in making this wonderful new and spontaneous experience possible. I look forward to lots more work in this team.

Earlier posting on this subject -
http://www.susie-mallett.org/2009/09/spontaneous-vernissage.html