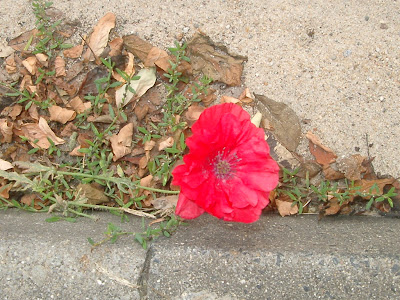 It is a special day in the German calendar too

For me it is Armistice Day

At eleven o’clock this morning I held my own personal minutes of silence. It is Armistice Day today.

I brought my work to a standstill at the eleventh hour of the eleventh day of the eleventh month for six minutes and forty nine seconds, exactly the length of a gorgeous piece of Mozart which we use for learning relaxation and rhythmical breathing.

I used the time to remember those who have died fighting for their countries. I do not have a poppy this year, I used to get one in the post from my Mum that I always wore on my coat for the week.

In Budapest I could buy one at the British Embassy, but I don’t have an Embassy here in Nürnberg. My mum was my supplier of Remembrance Poppies and many other things British (teabags mostly).

In the group today we relaxed with our thoughts for these few minutes. Two members of my MS group actually fell asleep.

That’s the English bit for me, for the Germans today had two other special meanings.

The eleventh of the eleventh at eleven minutes past eleven is the beginning of carnival time, of Mardi Gras, or of Fasching, depending where you live. Wherever you are, today begin the festivities that lead up to lent.

Tonight the television will be full of party shows. Girls kicking their legs high in Garda costume and men dressed up as women. This is what I found written in the internet:

It really does, it goes crazy, and by the time Shrove Tuesday arrives everyone of the party- goers is burnt out and ready for the “rest” that Lent enforces.

The “Littlies” are also enjoying this evening as today is Pelzmärtel.

This is the Evangelic version of Nikolaus who comes to deliver his pressies and sticks on the December 6th in the Catholic regions of Germany.

In Nürnberg we have the Pelzmärtel who visited me just at the same time as the littlies arrived this afternoon, with a gorgeous candle and some advent biscuits. The Pelzmärtel will be out and about at dusk tonight with his sack, perhaps even on a horse, dishing out nuts and fruit to all the children he meets.

As it is also St. Martins day we can assume that the Pelzmärtel originates from this story.

I have seen lots of children on my ride home this evening, all out processing with their handmade lanterns. This procession by candlelight usually ends with warm drinks and a Breze, a twisted bread roll, followed by a re-enaction of the story of St Martin.

St Martin was a soldier who met a poor beggar while out on his horse in the snow. He took his sword to his robe to divide it in two so that he could give the poor beggar half of it. This act of kindness is the subject of the many songs that the children learn and sing while walking through the countryside, or through the city, often stopping to sing to groups of other people, in old people’s homes for example.