The Man of the Match 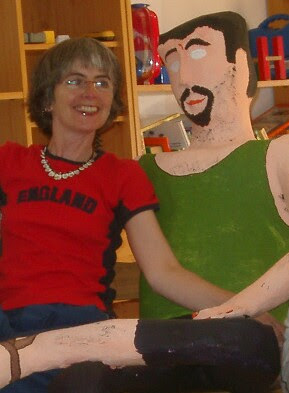 I think that all would agree who were present at the Congress yesterday that the Man of the Match was Prof.Dr. Moll from Erlangen.

He talked about the brain!

He even looked the part.

He wore a grey suit and a snazzy dark bow-tie, every inch a mad professor who would be expected to do nothing other than talk about the brain.

No power-point presentation for him

He used an over-head projector and most of his images were headlines from newspaper, with photographs and postcards, or maybe they were pages from the National Geographic Magazine, of nomads, and eskimos, and Indians and even cowboys.

All were used to demonstrated the development of a very young brain.

He told us about the inherited qualities and the influences before birth, and the proceses that take place in the young, still developing, years with all the influences from the individual upbringing that the child receives.

We were shown rapid-fire pictures and allowed to judge for ourselves what we saw and what influences the young brain was receiving, and perhaps to imagine how the child would be as an adult because of these influences.

The sentence that stuck in my mind, and apparently that of the conductor who added it to her own presentation later, was that each individual needs an individual environment in which to develop and be encouraged to reach their own potential at their own speed.

As the one conductor of the whole show later said, this is exactly what we in the conductive group, and especially in the integrated Montessori-Petö Kindergarten, hope to provide for all our children, disabled and non-disabled alike.

My vision is, that all children have the optimal chance to develop and to grow up and live in the society.