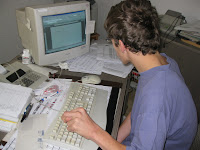 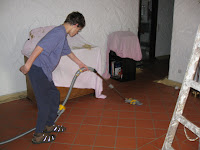 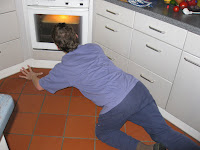 Young man at work, October 2008.
I asked my client how I could begin to write a posting to describe yet another chapter in our work together and he solved the problem immediately with the sentence “Na ja, du warst kalt”. ("Well, you were cold").
Yes, he was right. We had been out marching through the hills and maize fields when suddenly the skies became grey and dreary, a heavy mist fell over us, an icy wind whistled around our ears and, to add to it all, it started drizzling. I got very cold despite my winter jacket and because of this my client was able to show off his skills once again as he came up with a quick solution. He turned to me and said “Komm” ("Come on") and off he went jogging up hill. He set off at such a speed that I could hardly keep up. That was a shock, not that I was unfit (I’m not), but that he could run so fast. I didn’t know it and neither did he, he was as surprised as I was. The village were probably surprised to see us too as we must have presented a very odd picture, my client setting the pace with his gangly athetoid gait, knees knocking and arms flying, and me one step to the side praying that he wouldn’t fall flat on his face. What could I do to save him if he did, except throw myself in front of him to cushion the fall?
Luckily these were unfounded concerns and we made it, jogging the half a mile home where I was promptly asked “Na und?” ("And?"). Yes, he knew that he had yet again found the right solution, the jogging had worked wonders, we were both very warm!

After we had written the above anecdote together my client talked to me about the experience this morning of learning to use the vacuum cleaner. He explained how easy it was after he had worked out that he could stand in one spot and work by stretching his arm backwards and forwards, moving it in a semi-circle around himself, and then he could take a step forward and clean the next semi-circle. He used some very logical thinking and yet another problem was solved.
While I was watching “the cleaner” my thoughts kept wandering back to the film that I had watched last night (a link to it is in Gill Maguire’s latest posting) showing teenagers at the Petö Institute using the Nintendo Wii). I was impressed by this film and knew immediately which of my clients, both children and adults, to whom I would recommend it, my present client being amongst them. But on the other hand, while we were learning vacuum cleaning and singing along to Tina T as loud as we could, I also thought “Who needs Nintendo? We have got all we need here!”

Our morning was really full of independence, new experiences, solved problems and real-life conductive upbringing. My client had cleared the breakfast table alone, he had learnt how to wield a“Nintendo” vacuum cleaner, he had contributed to writing this posting, and used the computer and the printer to write a letter to his godmother. No sooner had we put away the cleaner and got started on a bit of "conventional" Conductive Education (lying comfortably on our mats on the floor, moving arms and legs and doing a few sit-ups) than we got suddenly brought back to “reality”. We narrowly missed injury when a heavy glass lampshade fell from the ceiling crashed onto the tiled floor and “exploded” around us. Luckily we had already practised the vacuuming, now was the chance to get into real-live action and it was cleared up in a flash.

We got quickly back to the conventional stuff as we had a date later in the kitchen to bake a birthday cake. As you see in the photograph, what we learnt in the lying programme we were able to apply to the cake-baking!