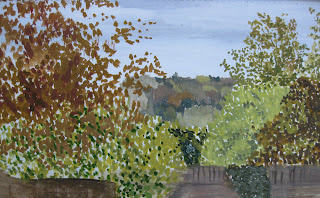 " Bracondale" by Susie Mallett, 1976
Recently it seems that blogs just drop into my hands, like the leaves that yesterday suddenly started falling from the trees.

Two blogs in two days handed to me on a plate. There are a hundred-and-one blogs floating around in my head waiting to be grabbed hold of and written down. Sometimes it only takes a magazine article to be lying around in the office or for a sentence to be uttered by a client and Bob’s your uncle there it is, a blog posting actualised sitting in the palm of my hand.

After work this evening I was searching my files for something for my adult clients and came across something which I would have liked to have had in my hand a week or two back when I wrote a comment on Andrew Sutton’s posting “ Fantasy and reality”, September 20th 2008.
This is what I did write:
"I looked at Barry Hynes webpage http://ezinearticles.com/?expert=Barry_Hynes and opened a few of the articles, one of which was "Diagnosis and treatment of cerebral palsy", and I wondered if Bobath trained therapist would be just as dissatisfied with what they read there about their profession as those involved in CE are when they read the definition of CE."
I continued in my comment by quoting the description that Barry Hynes had given of Bobath therapy and implied that it didn’t give us much of insight into the treatment that Dr and Mrs Bobath developed over a 40-year period.

Today I found the article that I hadn’t found on September 20th, a paper written by Kate Hedges, a certified Bobath teacher from New Zealand, THAT gives a much more informed view of both Conductive Education and the Bobath concept than Barry Hynes does . On Bobath she writes:

I read further and what did I find? That Kate Hedges is writing about handling babies! So I quote this paragraph both to give further information on the work of the Bobaths and to suggest to the Mr Parnells of the world that it is possible to recognise motor disorder in babies and it isn’t only conductors who are working with these babies (See my posting "From the very start of life: pessimism or optimism?", 26th September 2008).

“Neuro- developmental treatment is directed towards the developing nervous system. On the basis of this many and varied handling techniques have been developed which elicit and stimulate controlled automatic responses from the baby. Treatment by handling guides the motor output and results in more normal movement patterns. As the baby learns to be more active in relation to his environment and in daily functional activities, the guidance given by the therapist or parent is withdrawn.

"Techniques, which are only tools, are selected to suit the needs of an individual child.”

Very interesting, Susie. I have put some references up on my blog for anyone who wants to follow up on the Bobaths, the Bobaths and CE.
www.ce-library.blogspot.com