Have a break, have a piece of poetry and a cup of tea 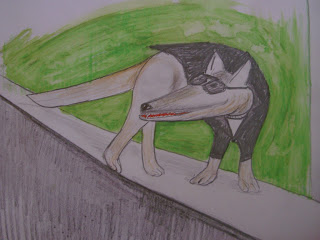 The road less travelled, 2004 by Suise Mallett
The nice bits in between
I am getting diverted from the job in hand which is preparing for Budapest next week. Of course with the carnival music from Munich still buzzing in my ears it is understandable that it is difficult to concentrate on one thing especially as there are blogs on the congress to be written.
So to get myself back on the right course I decided to have a break and I grabbed one of my many poetry books to look at as I had a cup of tea.

First you should know that the last thing I was thinking about when preparing for Budapest and before getting distracted with a blog was how interesting it is that my path has brought me full circle, but always spiralling upwards, back to Budapest almost exactly 15 years since I first arrived there.

I pulled the first poetry book from the shelf that my fingers touched and randomly opened my much-used copy of “ The Nation's Favourite Poems”. And now I am still sitting here still distracted from my work, the music from the Oktoberfest gone for a moment and replaced by the last lines of Robert Frost’s poem "The road not taken":
I took the one less travelled by,
And that has made all the difference.

Yes, I did take an unusual path. It has led me to such interesting work, people and places and I hope I am able to show my Begeisterung (boundless enthusiasm) which has developed on this path less travelled, to my audience next week, but that will only be possible if I put the book back on the shelf, shut out the Oktoberfest music and get typing!


THE ROAD NOT TAKEN by Robert Frost

Two roads diverged in a yellow wood,
And sorry I could not travel both
And be one traveller, long I stood
And looked down one as far as I could
To where it bent in the undergrowth;

Then took the other, as just as fair,
And having perhaps the better claim,
Because it was grassy and wanted wear;
Though as for that the passing there
Had worn them really about the same,

And both that morning equally lay
In leaves no step had trodden black.
Oh, I kept the first for another day!
Yet knowing how way leads on to way,
I doubted if I should ever come back.

I shall be telling this with a sigh
Somewhere ages and ages hence:
Two roads diverging in a wood, and I-
I took the one less travelled by,
And that has made all the difference.