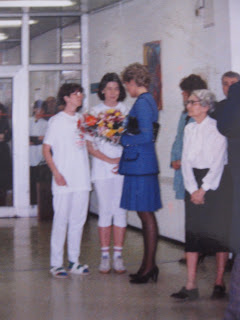 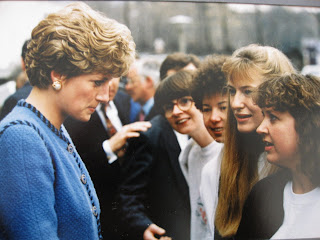 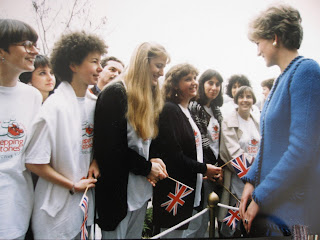 Di and I, 23th March 1992
See Notes below for dramatis personae
On Friday 10th October Andrew Sutton in his posting “Lady Dee visits Petö Institute” refers to a video film that can be seen on Jerzy Maslanka’s Vlog, http://www.youtube.com/profile?user=jerzy36maslanka.

This film was made on 23rd March 1992 when I was in my third year of studies at the Petö Institute.

I was working with adults at the time, so I didn’t get to witness her crawling on the floor with the children, which every one talked about afterwards, but nevertheless it was a day to be remembered for the rest of our lives. I had been chosen to be presented to Princess Diana, as the representative of the students from the Foundation for Conductive Education, along with a student conductor from the then Spastic Society (now Scope). This presentation can be seen in the first photograph, with me on the left and a worried-looking Dr Mária Hári scuttling past on the right.

Looking gorgeous in blue Chanel
So, although I didn’t witness Princess Diana on the floor playing with the children, whom she later told us she would have loved to take home with her, I did get to shake her amazingly soft hand, see her gorgeous Chanel suit close to, really see her sparkling eyes and smile, and at the same time have a short chat with her. I loved it. I remember Andrew Sutton asking at the time “Why is Susie meeting Diana? She is the least patriotic of us all”. I had done the not-always pleasant job of student-representative for two or three years running and it was as a bit of a reward for this that I was chosen for the meeting. It was well worth all the aggravation of being student rep..
Princess Diana was Patron of the Foundation for Conductive Education from December 1990 to December 1993, making two visits to the Petö Institute during this time and also attending fundraising functions for the Foundation in the UK. At one of these functions in London, on 27th February 1992, she had spoken with Andrew Sutton and heard about the lives and studies of the student conductors in Budapest and, it appeared to me, when we met she remembered it all!
She asked me about where I lived, about my work, about learning the language and even about the social and cultural life in Budapest. She was to attend a performance of Swansong by the National English Ballet that same evening, so it probably interested her to hear that I had seen my first ballet there in Budapest, and got hooked. I had actually seen Rudolph Nureyev’s last performance just a few weeks previously, though I didn’t remember to tell her that at the time, I was too nervous.
The whole of my peer-group and many of the British parents gathered outside the Petö Institute to see Diana leaving, not expecting that she would spend further time with us. She just went on chatting while her body guards tried to usher her into the waiting limousine. One of the things that I remember her saying is "The kids are georgeous I want to take the whole lot home with me!" She was fun and she looked lovely, and you can tell by all of our faces that we were entranced, like in a fairy tale!
A morale boost
Princess Diana was attended on this visit, I believe, by her sister or sister-in-law. It was a very difficult time to be away from home, as her father was very ill. He died on 29th March, only days after she was at the Petö Institute. I wondered whether, while she was making our day so special and boosting the morals of both the British families and of everyone she met, that perhaps she was wishing she was at home with her own family.
This mades me now appreciate her presence even more. It really was amazing what this presence achieved, everybody was smiling for days at the Petö Institute as they talked about the Princess and her visit. The children wanted to dress like princesses, the theme was used in many groups as motivation in the programmes, and the bufe was a buzz of stories about her.
Something of her presence did remain to encourage us students in our studies, the children in their tasks and the parents in the hardships of daily life in what at that time was still a very foreign country.
It was sometimes very difficult for us all there, miles away from home and our families. Diana understood this and said so! She talked to the parents about it, she encouraged the children by her closeness in the groups and me… well, I got hooked, I became a fan.
She certainly did have that something special that I had read so much about in the newspapers.

Jerzy Maslanka
http://www.youtube.com/profile?user=jerzy36maslanka.
Bufe; the place in the centre of the Petö Institute where everyone, conductors, parents, children and adults, gathered to drink a very strong coffee, eat a wonderful fried, scrambled egg roll, to chat and relax, meet people or to start or end a shift. Sadly, the cafe is no longer there and the seats are mostly empty.

Photographs
1. From the left, myself, Kerstin (a student from the Spastic Society), Princess Diana and Dr Mária Hári, in the foyer of Petö Institute, Budapest 23 Spetember 1992

2. and 3. My peer-group talking to Diana outside the Petö Institute while the bodyguards were trying to hurry her away (as you can see in the film posted by Jerry Maslanka). Diana appeared quite reluctant to leave. That’s me peering out at the left hand end of the white T-shirted row of British students.

Just a coincidence
In the video film just mentioned, which shows Daina visiting the children in the group, I am sure that the conductor talking with them is the same conductor introducing the children from the Petö Institute using the Wii, in a much more recent video report:
Thursday 9th October “Wii: a fun pedagogic tool”
http://andrew-sutton.blogspot.com/search?updated-max=2008-10-12T21%3A38%3A00%2B01%3A00&max-results=4