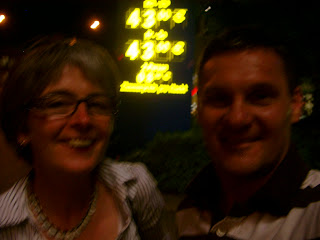 It is great to be living in the middle of the city. At the drop of a hat or the beep of text message I can be on the other side of the city in just 30 minutes to meet someone for a coffee, or in this case a beer.
I just met up with fellow blogger and conductor Szogeczki Laci.
A Hungarian conductor en route to Budapest from his home in England meets an English conductor whose home is in Nürnberg. "Spontaneity" at the sending of a text. As the title says that's "Pure Petö".
(Mária Hári talked often of spontaneity in our lectures and in the many papers she wrote, see notes).
When I think about the subjects that Laci and I managed to cover in the two hours we were together my chosen title becomes even more appropriate. The list reads like the index from one of Dr András Petö's books and a list of his interests combined.

We talked about art and literature and poetry, we touched on logotherapy and theatre and the personalities of different nationalities and cultures, and of course at some point we mentioned Conductive Education. We mentioned group dynamics, the Seele and Buddhism. We exchanged thoughts and ideas and when we parted I had the feeling that maybe the world of Conductive Education is not such a bad place to be working in after all!

It was refreshing for us to meet, especially in such a spontaneous and conductive way. We both decided one of the best things about Conductive Education is that you can meet another conductor almost anywhere in the world.
I once met a conductor quite unexpectedly at the top of a mountain in Canada
Notes
Laci's new blog : http://www.szogeczki.blogspot.com/

"The goal is to learn a way of life, a way of thinking and planning, a way of problem-solving and the ability to convert intention into action. These are to be found by the learner who is conducted by the conductor, who establishes activity and provides spontaniety which is the precondition of problem-solving in the learner's whole life".