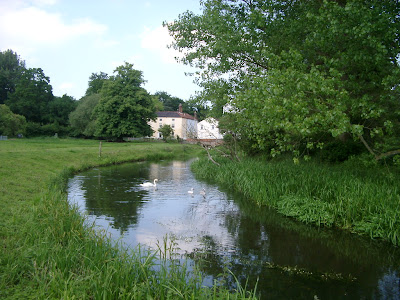 England looks different from the air, recognisable from any other country I have visited by its field patterns, its hedgerows, its oak trees, the shape of its towns and villages and of course by its greenness. The feeling of homecoming gets stronger the nearer this view gets and it always surprises me by its presence. This particular homecoming was different and as I passed over the coastline a thick covering of cloud prevented me from seeing any of the land that for weeks I had been longing to visit.
The map above my head showed the plane’s position so I knew was flying over England, not a single cow, pasture, cricket pitch or football ground to be seen but I knew where I was and I would soon be home for the first time since October last year.

When I did at last see the English landscape on my journey to Norfolk it was exactly as I imagined, very different to the green left behind in Germany, that was still fresh, light and spring-like. My English green is difficult to describe, it is simply different because it is impregnated with feelings. The nearest I can get to it is with “racing green” because this is a colour which describes something more than just a colour: it is also impregnated with emotions, tradition and “Britishness”, just like me!

I arrived smiling in Norwich, hat in hand, ready to get involved in family life and enjoy the wedding that I described in an earlier blog.

Jerusalem
I always refer to England as the green and pleasant land, ever since I left its shores in 1989 to live “abroad”, as the British call any land across the sea. The poem from which these words come has accompanied me throughout my life, from grammar school days when it was our school hymn to the many funerals and weddings where it was sung over the years, not forgetting of course the BBC’s Last Night of the Proms which is broadcast live in Germany for all us patriotic Brits to enjoy with great pomp and circumstance.

And did those feet in ancient time,
Walk upon England's mountains green:
And was the holy lamb of God,
On England's pastures seen!
And did his countenance divine,
Shine forth upon our clouded hills?
And was Jerusalem builded here,
Among the dark satanic mills?

Bring me my bow of burning gold;
Bring me my arrows of desire:
Bring me my spear: O clouds unfold:
Bring me my chariot of fire!
I will not cease the mental fight,
Nor shall my sword sleep in my hand:
Till we have built Jerusalem,
In England’s green and pleasant land
William Blake

I have never actually known what this song is all about. As a child I always asked myself what has Jerusalem got to do with England’s greenness, I knew it as a hot place and thought surely it is more yellow and dry there and has nothing to do with “home”.

William Blake was inspired to write this poem by a story about Jesus visiting Glastonbury in England and establishing there a second Jerusalem. Maybe William Blake believed in this legend maybe not, it is a poem full of questions left unanswered. Did Blake hope that people would see the beauty of their land and the human race and that they could fight the mental fight against the invincible and incomprehensible scheme of human conduct that he describes later in the main poem?
Did he hope, as we conductors also hope, that people could learn to live “independent, dignified and fulfilled lives” despite the difficulties set before them? In the main poem he describes the Satanic Mills beneath earth and water. The hidden human qualities, the evil which needs to be fought with bows and arrows and chariots of fire in order to build a Heaven on Earth, the green and pleasant land of England.

I think I have carried this picture of a heaven on earth with me over the years. It is certainly a heavenly feeling when I return. It is a lightening of the heart and a lifting of my soul that I feel in the moments when I cross the channel, when the plane lands and I start homeward-bound through the countryside of Norfolk. Sadly, I made this soul-lifting journey too often over the past few weeks, maybe this wasn’t a bad thing as my soul needed a lot of lifting. I am a much-changed person for having had to do it.

The notes for this blog were written a week after my arrival in UK with the wedding of the year over. With my sister and her husband, I was sitting on a plane to Edinburgh, in the sun above the clouds and about to start a day trip that my sister had planned as a relaxing closure to the months of wedding fever. It was the day before I adain left my green and pleasant England on an unscheduled trip back to Germany, bang in the middle of my planned holiday.

Racing green:
http://en.wikipedia.org/wiki/British_racing_green
“In keeping with these Irish/Napier roots, many of the earliest greens used on British racing cars were of a lighter olive, moss or emerald green. Later, darker shades became more common.”
The Last Night of the Proms: http://en.wikipedia.org/wiki/Last_Night_of_the_Proms#Last_Night_of_the_Proms