The best part of my Congress

My favourite part of the Congress that I was personally involved with was being with George McDowell and his family at George’s workshop and book presentation.

First I will publish here my introduction to his book that was also a press release at the Congress, followed by the resume of George’s presentation.

I have never met George and his family but I have been aware of their conductive lifestyle for almost all of my conductive life, by repute, through newspaper reports and from their own writing, online, in The Conductor magazine, in Intelligent Love and elsewhere.

In the years since the 7th World Congress for Conductive Education I have been actively encouraging people who I know in the field to take part in the 8th, either with poster or oral presentations. One of those who readily agreed was George. He decided that with the help of his ever-conductive family he would present about his ‘conductive lifestyle’, and I offered to produce a booklet to accompany his presentation.

As his extended family is able to speak several languages between them, one of them German, it seemed logical to publish this booklet in German as well as in English for use at the congress in Germany.

George and I are indebted to George’s Hungarian aunt Mrs. Magdolna Perlaki (neé  Aldobolyi Nagy) – Magdi – for the German translations, to his mother for her contributions, to his father for encouragement and technical help, and to Andrew Sutton who has known the family for nearly thirty years, for his Afterword.

I hope that by publishing another book in Conductor Nürnberg’s series Conductive Lifestyles we encourage more people with disability and their families, to share their active lives in print, while at the same time benefitting from the whole experience of creating and distributing their own written book.

Over the years it is books and booklets like these that have provided me with so much insight to the hidden parts of the world of disabled living. These are the parts that rarely get mentioned in the technical literature.

Along the way, I hope that these books also give some indication of what a conductive lifestyle at home, in the family, can achieve.

As Andrew Sutton said in his afterword ‘George’s book takes a fresh look and it represents a significant development in the technical as well as popular awareness of Conductive Education.

1.  Susie Mallett is a British conductor, trained at the Pető Institute in Budapest, living in Bavaria now for 20 years.
2.  She works as a self-employed, peripatetic conductor and is also an artist and art therapist.
3.  As a conductor she works to develop the conductive approach as a conductive upbringing, and a conductive lifestyle, with special reference to the lives of families.
4.  She publishes two blogs:
www.susie-mallett.org
www.susie-mallett.com
5.   Since 2010 she has her own small publishing house Conductor Nürnberg, with four publications now, in English, German and Chinese.

The workshop with George McDowell 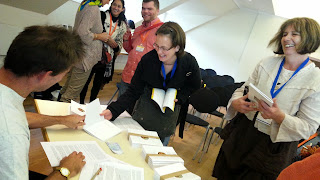 I hope you will understand me OK!  I speak in English, but with a Northern Ireland accent.

I am also fluent in Hungarian, because my mother is Hungarian, and I spent a large part of my formative years in Hungary, attending the Pető Institute in Budapest.

II.               My first “conductive” memories are from the Villányi út, the original location of the Institute. In 1975/76  I spent a whole school year there, as a day-pupil. I remember our daily trips by tram to the entrance of the Institute. Every morning we went through the main building to arrive to the wooden house (the “Faház”) at the back of the garden, to my own group. It was a long walk with my mother, and occasionally we would bump into Dr. Hári on the way. When this happened I was particularly careful to do my BEST WALKING. “Jó reggelt kivánok,” - I would say - , and she smilingly would’ve said “Mi mindig találkozunk” (“We always seem to meet here”).... At this time walking was a big task for me; I learnt to do it with the help of 2 sticks. (I was 4.) The use of a pushchair, or wheelchair was forbidden on Institute premises.

III.           And I kept to this principle while later attending a Special School at home in Belfast.
I went there by taxi, coming home the same way.  Our house in Crossnacreevy was elevated from street level, with a very steep driveway up to the door. The taxi wouldn’t drive up (nor would my mother!) so walking down to the taxi, and, in the afternoon, up to the door,  provided a twice-daily, out-of-school exercise for me. From 7 years of age I could walk independently, but it was usually very windy in Crossnacreevy!  A hand rail was provided eventually. When I arrived home from school with the taxi, I always tried to get out and hurry up the driveway before my mother could get down for me. (With her, and with “proper” walking, it took longer!)

At school I really enjoyed drama, music, and art-classes (the highlight was performing at Christmas Concerts!); also sport, which included swimming and horse-riding. I tried football, but not very successfully, as I ended up getting a front tooth knocked out when I was 11!

All through this time the summer months were spent “conductively”, partly at the Institute and partly at Hungarian, and other, holiday locations, with my father joining us from home.
IV.            I was about 15 years of age when Conductive Education “came into fashion” in Britain. With the resulting expansion of the Pető Institute I, luckily, became part of their International Teenagers Group at the new building at Kútvölgyi út, and could thereby continue my visits to the Institute. Surprisingly, there were far more steps there (both inside and outside) than at the old place! I spent a lot of time practicing on the inside staircase with a conductor, and on the outside steps with my mother. I had a fear of the type of staircases where I couldn’t see the top or the bottom. We sometimes walked up to my grandmother’s 3rd floor apartment or we walked down, avoiding the lift so eventually I did learn to overcome (or rather manage) this fear. Much later I found out that it’s my „perceptual difficulties”, that are at the root of this problem (=I have rather limited field vision) , and that’s also why I could never learn to drive...

Back to Budapest, and the late 80-s, early 90-s! There were a lot of British and Irish families attending the Institute at this time. We enjoyed the patronage of the British Embassy. There were coffee-and-cakes on Saturday afternoons for us, and they also helped to arrange visits by British politicians to the Institute. Coming from Northern Ireland, I was well aware of politics by now, and watched with interest the various visiting dignitaries.

V.                At home we embraced the British R.A.C.E. movement (Rapid Action for Conductive Education) and – utilizing the sudden interest – we did several press and media appearances to promote the cause! RACE N.I. organized 4 consecutive Summer Schools, led by Hungarian conductors, which I enthusiastically participated in.

Meanwhile I had quite a struggle to pass enough State exams to achieve my ambition, to go to University.  I do have problems with Maths; however, I was admitted to the University of Ulster to study Sociology.

I loved studying! Of course, I was faced with many new challenges.  First of all, access, - a taxi took me to the University’s back entrance, to the lifts, then I had to find the locations of lectures and seminars in the vast complex. I used the lifts – which were sometimes faulty, and I had at least one bad fall as a result. To take down lecture notes, I used a Dictaphone, and wrote everything up on the computer at home afterwards.  Not so long ago I was invited back to my University for an interview, and I saw how much more “disabled friendly” everything is now, (e.g. disabled students are provided with a Personal Assistant if necessary, and they don’t have to go in through the “Tradesmen’s Entrance” anymore either!).

At the end of 3 years I graduated with a “Two – One Honours” degree. It was a very happy day for me!

What does this mean for me? 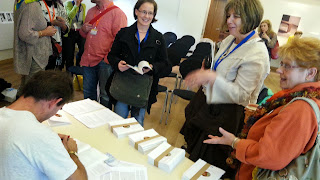 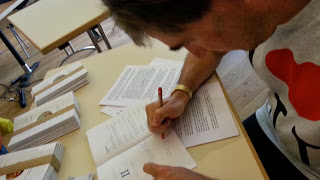 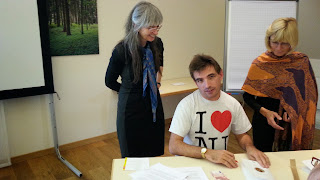 Resume of George’s presentation in German –