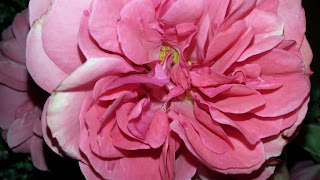 I was grateful to be reminded of the posting I wrote in March 2011 about an afternoon of presentations that had impressed so much that I am going to try the same method in a presentation of my own.

I have decided to re-publish the posting as I think it is quite appropriate as those who will be attending and speaking at the 8th World Congress in Munich will be preparing their presentations.

I am sitting in the weak sunshine, feeling absolutely amazed by the experience that I have had this afternoon. Here in the late afternoon sun on the terrace of one of Nürnberg’s hospitals, Klinikum Süd, I am able to recap on all I heard in the past three hours, read through my notes and ponder a little.

I am not allowed to switch on my computer in the hospital; otherwise I would be posting this immediately to capture some of the on-the-spot enthusiasm that I have. I hope that it will still shine through later when I write up my notes.

I have just listened, for free, courtesy of Nürnberg’s Tower of the Senses Museum and BrainWEEK, to sixteen doctors and professors from the different clinics of Nürnberg’s main hospitals. They were talking about anything and everything to do with neurology.

One question at the end of the second of the three one-hour sessions was “Why are you only mentioning how the brain is influenced by medicine, or trauma, etc., and not touching on our emotions?” The quick answer was “Because this is BrainWEEK!” Not one of the doctors denied that medicine and therapies, lifestyle, activity, social contact with people, all played important roles in our health, but as they said, it is the brain that is the international topic of discussion this week.

First we were treated to talks by psychologists and consultants from the psychology and psychiatric departments who explained about their work with Alzheimer’s, dementia, depression, anti-depressive medicines and the real personality of sleep! (Or indeed lack of it).

In the second session child and youth psychologists and neurologists from the field of psychosomatics and psychotherapy were talking about concentration disorders, Autism and Asperger’s, the treatments and therapies for traumatic experiences, hyperactivity, and burnout and pain memory.

In the final session we heard from neurologists, psychologists and a neurosurgeon discussing nicotine addiction, doping, surgery in the brain, remembering and forgetting, training the memory.

I came away reassured

Amongst these wonderful speakers, these doctors who all told us about the use of pharmaceutical medicine in their therapies and treatments of patients, there was not one who did not promote the importance in support of their use drugs, of psychotherapy, sport, diet, lifestyle and social conditions, communication, motivation and activity on our well-being.

I felt quite at home.

There was not one doctor who claimed to know what was going on inside our heads but they had a lot of experience amongst them and could tell us quite a lot about how they work to try to normalise disturbances in the well-being of their patients.

They know about the chemical reactions at synapses and now some drugs can have positive and some negative effects on this. They explained about the uses of anti-depressants and anti-epileptic drugs and the results that they and their patients experience.

The concluding questions and answers brought us to the fact that despite tremendous leaps forwards in the study of the brain in recent years we still do not know very much. One doctor said that what we know now is hardly scratching the surface of what is happening in our brains and it is impossible to predict whether over the next hundreds of years much more will be discovered. He said the scientists know about the influences and benefits that certain drugs and therapies can have on certain disturbances in the brain and the influences that they have on the ability of patients to live a normal life, but he made it absolutely clear to us that the researchers and neurologists are working on the tip of a huge iceberg. He said that at the moment there is nothing to indicate that the knowledge of what is going on inside our skulls will get any deeper.

I really was good to soak up so much information in such a short time, and be enthused by such knowledgeable and jolly people. It was almost like a party atmosphere with hundreds of people crammed in to a room that was far too small for the occasion. We were perched on the window-sills and sitting on the floor in the aisles until someone decided to leave and a chair became free. I did not leave my seat once, having eventually got one, the quality of the talks just got better and better and I did not want to miss a thing.

The afternoon had been organised using a method from Japan called Pecha Kucha. Each speaker had twenty slides; each slide was up on the screen for just twenty seconds. It was so easy for them to time their speech to the slides and in not one of the fifteen cases was the gong needed. This meant that there was plenty of time for the discussion at the end of each session and time to get a drink too.

We could perhaps learn something from this for future conductive congresses.

I sat a bit longer in the sun and thought about what I had heard before it was time to go off in search of the next venue for some more BrainWEEK action.

One of the questions put to the doctors was “What can we do in our lives, through our diet, to increase our well-being”. They were in total agreement that eating bananas for the tryptophan and chocolate for the serotonin was a good place to start, but none of them were prepared to say how much chocolate we should eat!