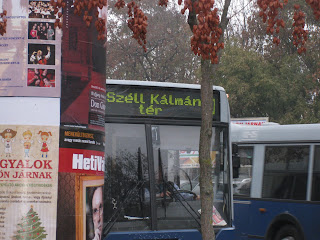 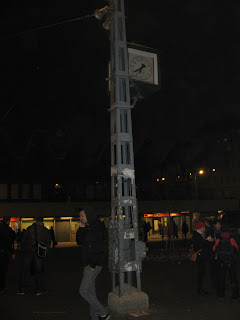 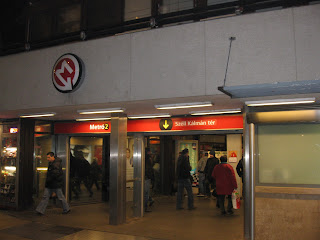 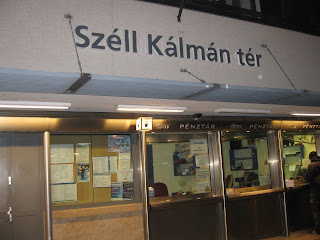 Sure enough
I have seen it with my own eyes.
The clock is still there, for meeting friends under. The brilliant book-stall is still there, so I just had to buy a book. I chose one about story-telling and the wishes of children, and perhaps adults, to live in such a fairy-tale world.

The ticket-office is still there, where I bought my first monthly student-ticket for two-hundred-and-forty forints. That was in Septenber 1989 and today, twenty-two years and one month later, I bought a three-day pass for more than three thousand forints!

The pot-holes are all still there in the same places. The red letter-box is still there with the lovely post-office building towering behind. The clattering, yellow trams are still there, the pogácsa stand is still there and the icing on the cake, there was one tessék néni selling flowers. At this late hour she was no longer calling "Tessék Tessék Virágok!"
Moszkva Tér is still there, except somehow it isn’t
Széll Kálmán tér is there instead looking exactly like Moszva tér always did, except for the sign on the metro station.
It is still a grubby, yellow round-about of clattering trams and dark figures always rushing in all directions, with a few standing still under the clock.
I took myself off down the road this evening after the conference that I attended had finished. I just had to check that nothing had really changed, even though the bus pictured above, that I saw outside the Petö Institute at nine o‘clock this morning, had Széll Kálmán tér clearly as its destination.

I feel relaxed that Budapest is still Budapest even if Moszkva tér, in name only, has vanished.
Notes
Pogácsa - cheese scone
Tessék néne - a lady from the countryisde selling wares, often flowers
Posted by Susie Mallett at 23:52

I would miss the huge red star at the top of the post office building, but that really is very old history now!