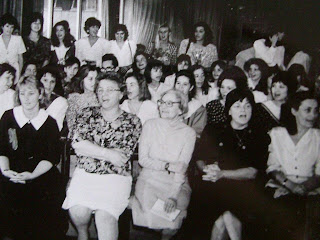 Petö Institute, 1993
Several people who I met at the weekend appear
on this photograph. It was taken just after I had received
my diploma from Dr Mária Háriwho is seated in the centre of the front row.
Football training camp

I have written about Jesse Powers on my blog before.
He is an inspiration to us all
He is a keen photographer using this skill to raise money to attend Conductive Education camps by selling his art. He held an auction several months ago of his own work and that of others. I sent him some of my own paintings and a couple of books to include amongst the lots.
Jesse is also a keen sports man
Take a look at this to discover just how keen he is:
http://www.canadasoccer.com/canada-s-para-soccer-team-gearing-up-for-final-camp-of-2011-p147988
I have an inkling that two other past clients are training hard for next September too. They both ride tricycles in road-racing events.
http://www.canadian-cycling.com/disciplines/sites/default/files/Immunity-FX%20Canadian%20Road%20Championships%20-%20Para%20-%20T1-T2%20Men%20-%20Results.pdf
Best wishes to you all!
Notes
Jesse Powers -  http://power2jesse.blogspot.com/
Posted by Susie Mallett at 19:36