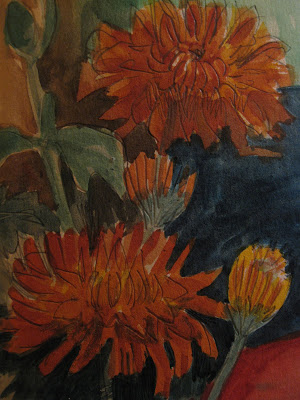 By Susie Mallett, from a 1981 sketchbook

Several weeks ago, right at the beginning of my holiday, I read a blog posting from a conductor who announced her “amazement” at hearing that one of her clients had realised why he was being asked to do a certain task in a lying programme.

The conductor described her amazement that a teenage boy was able to explain to another teenager the reason for holding a stick in the small of the back and bending and stretching the arms. The one told the other that it was so they could learn to pull up their trousers, (and to pull down the shirts and then tuck them in, I hope he was later told).

Now I have time to write about my own amazement

How can it be that these two teenage boys had not discussed with the conductors what they need to learn and how they can learn it?

It is our responsibility as conductors to teach our clients to solve problems. Part of this is to teach them how to practise movements that will help them achieve their aims and how to work out what movements they need to practise.

I have experience of working with seven-and eight-year-olds who are already adept at making up new games for their group mates to play to practise movements that are difficult.

If we begin our work when children are very young then there is a time when we teach them how to play specially chosen games with the mother beside them playing too and learning how to help. As children get older we begin to talk to them about the skills that they need to learn and what they can play and practise in order to achieve these. By the time they reach their teenage years clients will be taking responsibility for their own lives, deciding for themselves what they wish to participate in, and should be starting to discuss with their parents and conductors how they can achieve their own aims.

An abstract movement like bringing a stick up and down in the small of the back has to be related to dressing, or to reaching into a school bag that is hanging on the back of a chair, early on in a child’s life. How else will it be possible to relate the learnt movement to real daily life skills?

And as for a conductor being surprised that a teenager should ask and that another should be able to respond… words fail!