It is a family feeling 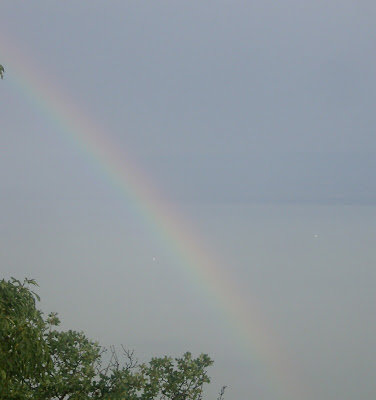 A rainbow at Lake Balaton, Hungary, Summer 2007
I often think: “What is it about being a conductor?”

This week I have been wondering about it more and more.

I have communicated with a few conductors since we heard the sad news that our colleague Rita Szarvas and her family were on the Air France flight from Rio that disappeared on Monday somewhere over the Atlantic Ocean.

No one quite knows what to say, how to express themselves, although I think Szögeczki László did it very well for us in his posting late on Monday night.
http://szogeczki.blogspot.com/2009/06/deep-sympathy.html

It is no different with me, I don’t know what to write either but I feel that I want write something.

All of us are thinking about Rita and her family and we all send our deepest sympathy.
It is difficult to express the other thoughts that we have.

I didn’t know Rita personally but I knew of her and that she had been working in England. She was part of the “conductor family” and I think that what many of us are feeling this week is the loss of a family member.

My desire to write something stems from this feeling of loss and the wish to describe what it is like to be a member of this huge “conductor family”, and to say what it feels like to be at work all day on Tuesday and not be able to stop thinking about a colleague whom I didn’t even know.

When my Mum died my Dad described to me what it is like for him to have been an engine driver. He wasn’t describing the work that he had done for forty eight years. He was telling me about the community feeling that he still shares with his “mates” almost twenty years after his retirement. He was describing the sense of belonging to a special family. He says that it is almost like a brotherhood.

It is almost exactly one year since my Dad told me this about his special railwaymen “mates” and this week, while communicating with other conductors, I have realised that I too belong to a special family community, that of conductors. I feel very privileged. It is a nice feeling, a feeling of belonging.

This feeling of a network, the rallying round and having an ear to listen, are of course much more apparent when there is great sadness. I have experienced it on other occasions when conductors I have known have died, or have become very sick, or when their family members have died.

I am glad to say that I have experienced it on happier occasions too.
Once it happened on top of a mountain top in Canada when a conductor recognised me from my time as a student at the Petö Institute. I didn’t recognise her but we immediately recognised each other as part of the same “family”. We began to talk to each other immediately but not as “total strangers”. Somehow we were not strangers at all!

I have arrived at work on at least two occasions at different conductive centres in Germany to be met by conductors with whom I had had contact some years previously. We met again like long- lost family members and then we worked together for a short time as well oiled teams.

I also feel this sense of family community when, as sometimes happens, I get a message out of the blue from a conductor. Someone I know, or quite possibly someone I don't. A conductor who is living somewhere out there in the big wide world who wishes to meet me as they pass through Nürnberg on route to Budapest or while on a tour through Europe.

This feeling of family community is tangible, I can see it on peoples' faces, I can feel it in their voices. I saw it on my colleague's face when I told her the sad news about Rita.
I think that this week’s sad news affects us all because we feel that we have lost a member of our huge extended family.

My thoughts go out to all those who knew Rita personally, her family, friends and colleagues.