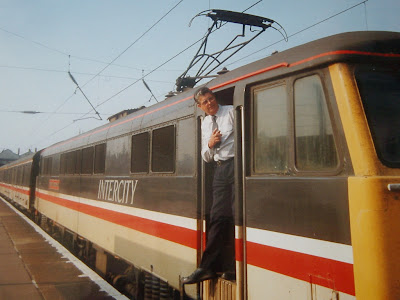 I just love trains. Looking at them, drawing them, playing with them, and most of all I love riding on them. Maybe one day soon I will even get to drive one (see notes).

Being the daughter of an engine driver I grew up travelling on trains, to the coast on the railcars to visit great aunts or up to the Smoke on the diesels. Unfortunately never with steam.
Steam was only being used at the loco shed for shunting when I was a child, so although I still got to hang over the bridge and breathe in the wonderful smells, I never actually got to travel by steam to London.

Free train travel as an engine-driver's daughter meant that as a student I never had to hitch-hike, I went all over England by train. I even had the luck to travel every day by railcar to my first college and I still remember all the details of that 30-minute journey, the mist over the marshes, the tumbling windmills, the driver with big ears who we knew only as “Lugs”.

My favourite journey by train to date must be the 12 hours scenic route from Auckland to Wellington, New Zealand. Drawing and writing and looking out at the changing landscape for one whole day, what bliss.

Maybe you are asking why I am writing about trains. I didn’t actually intend to write about trains here, it is just that I was at the Bahnhof (railway station) at 6.30am today to catch an ICE train, which is the most exciting of all the trains I travel on. They glide silently through the landscape reaching speeds up to 300 kph.. On some models, the ICE 3, you even get to sit behind the driver in a tiered carriage like at the theatre!

The station at this early hour was quieter, emptier, slower, the people more relaxed, just waking up. It was perfect, just like the work was when I got there. I was off on my ICE journey to start a new job, starting up new adults, groups in an already established CE centre for children.

I wasn’t actually intending to write about work either but it was great, I entered the building and the first thing I heard were “orthodox” Hungarian accents descending the stairs to greet me.

What I did intend to write about was buying myself a treat at the station, an English newspaper. What I actually bought was in fact a German newspaper in English, one that I had never read before, the German Times. As I picked it up I thought "I am sure there will be an idea for a blog in here", and lo and behold there it was on the front page of the “LIFE” section.

Art
“In the second half of the 19th century a few women in Paris did something they were not supposed to do: they painted. In the 20th Century not one noteworthy exhibition showed the paintings of the “revolutionary sisters”. Now ( in the 21st century) a superb exhibition at the Schirn Kunsthalle in Frankfurt is bringing them to light”

I am so glad I wasn’t born in the 19th century, I cannot imagine not being allowed to paint!

The article goes on to discuss the art of four women who were painting in Paris in the late 1800s – Berthe Morisot, Mary Cassatt, Eva Gonzalés and Marie Bracquemond. All of these women started off their painting “careers” quite successfully.

Marie Bracquemond learnt her skills at the Louvre, she was recognised by Degas, Monet and Renoir, but gave up painting in consideration of her artist husband ,who was less well known than she was. Mary Cassatt refused to marry from fear of being forced to give up her art. Eva Gonzalès painted with enthusiasm “a lot of cleavage and bare flesh”.

The only one of the four who really made it was Berthe Morisot, most probably because of the support she got from her artist brother-in-law, Edouard Manet (Olympia). Although she had a good relationship with men, including her “soul mates” Renoir, Camille Pissaro, and Monet, she rarely depicted men on her canvases. Instead she used women, in everyday life situations, "some in intimate poses, untying their shoelaces or pulling on their stockings”.

The article finishes with this statement about Berthe Morisot’s work:“Something else was breaking through, a free spirit that was not prepared to be just a woman, a mother and lover, a spirit for whom art could never represent a mere secondary existence.”

Nowadays painting is at least “allowed”, but there are still not many female artists around who actually earn a living from painting. Interestingly women on the screen and stage didn’t and still don’t have to struggle to receive recognition for their “art” (see "Womanly Women" list on right-hand side of my blog). From Marlene Dietrich to Lily Allen, Katherine Hepburn to Tina Turner they all hit the big time and are all household names.


How many of you have heard of Sarah Lucas, probably Britain’s best known living female painter? Frieda Kahlo, who maybe more people have heard of, is famous for her fighting spirit rather than for her art. She struggled to get recognition beside her very well known and successful artist husband, Diego Riviero, and later struggled with her disability.

It is time for a few more female artists to share the limelight alongside Tina Turner, more free spirits "for whom art could never be a secondary existence" breaking through.

Bure Valley Railway, Steam to the heart of the Norfolk Broads
http://www.bvrw.co.uk/