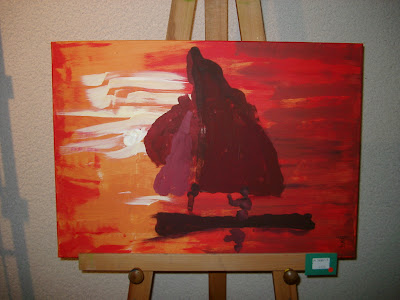 I have left the haven full of love where I have been working for the past two weeks.

My client thrives because of being loved intelligently – he actually gets very angry with anyone who tries to” love” him without this intelligence, as the “boy poor” sentiments I wrote about in the last posting illustrate.

He is part of a big extended family and he isn’t now and never has been treated any differently than his many siblings and cousins.

We did "our roundin-off" chat without either of his parents present. This was the first time we had done this alone. We discussed, wrote down and illustrated his homework and I asked for his comments, his thoughts and his feelings about our work together, I asked him to assess his own progress. I tried not to ask any leading questions.

Due to the problems my client has in articulating himself clearly I find it very important to take care how I ask him questions. I must leave him enough space to find his own answers and not lead him into the answer that I think he may want to give or that I might like to hear. It is also very important that I maintain a high level of interest, especially at moments when I have not understood well enough, otherwise he will give up trying to explain.

My client was eager to talk. I was enlightened, given a report on my “performance” and of his own development.

The first and most important detail he spoke about was how much he enjoys working with music playing. He said that working with music is very good, but it is also OK when I turn it off if he is not able to concentrate well. I usually let my teenagers bring CDs to play, it is a sort of extension from the times when they would bring a fluffy toy, then a matchbox car or a football scarf to put at the end of the plinth. Now we have CDs.

My client and I have been listening to music while we paint for a few years, but now we also listen during the other programmes. This time we had a selection of all the latest chart-busters, including Amy Winehouse, Rhianna and all the young stars for the lying programme, plus Rod Stewart, Tom Jones, Tina Turner and other great rockers to create a good walking-programme atmosphere. The music while we paint depends a lot on the mood and the subject-matter of the picture, but it is usually something to rock to!

The talk continued. “It is good that you are always happy and that we have fun while we work”, he said.
I asked whether he meant this week or always. He meant always.
I told him that it probably isn’t true that I have always been happy at work over the past 11 years, but if that is how he experiences it then that‘s absolutely fine by me.
This means I have succeeded in creating and maintaining a good working atmosphere, where any lapses of concentration or moments of sadness on either side is acceptable and incorporated into our day.
I explained that it is so much better to have fun when we work. I believe that through having a good time our energy levels rise which makes it then possible to do the oddball stuff, like the spontaneous walks and the cooking. My client complained that when he isn't having fun and is unable to concentrate properly he feels hubbelig. The translation of this into English is “bumpy”. It was difficult to know what he meant by this, whether his ride through his day or though life in general isn’t as smooth as it could be, or whether he is distracted, or whether he feels more jerky when he isn’t concentrating on his movement.
He went on to tell me that it is very good for him to have someone around for so many hours a day who understands his speech and is willing to listen to him expressing his worries about his future. As a teenager it is important for him not to have to repeat himself, for example when he asks for advice on determining whether he is in love or not. We actually decided he should ask the whole family this question, which he did,and they all gave their own opinions to help him out. Most of them said “It tingles”

I asked how he feels now the work with me was over, is he pleased with his success? I asked what he thought he had learnt, and this is the answer I received.

Nicht auf zugeben. He told me he had learnt not to give up.

Wow, I was speechless.
I had expected “I can make more controlled movements with my right arm” or "I can stretch my knees better”. I hadn’t expected such an abstract reply.
He was right, this is exactly what he had been learning since he was seven years old, when his CE life began - not to give up.
His mother said just yesterday that she admires the patience he has, trying something over and over again until it works. We had been observing him trying to get the last morsels from his plate on to his fork, which was difficult since he had removed the special rim from his plate. He didn’t give up, he got into his mouth.

Which conductor would not prefer receiving this answer that I got, the abstract “not to give up”, rather than more concrete answers about arms or knees? I was given another signal that this conductive upbringing really is working.

Of course, Dr Hári had something to say about this. Talking about teaching athetoid children, and of their learning, she said:
"It is slow but if they are conducted gradually and purposefully, building on the smallest actions, they can learn to build on their skills.

“Every child has to create his own appropriate technique for solving his problems and this is guided by the conductor.”