Music while you work 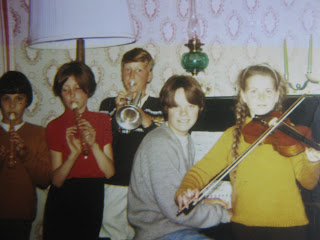 Music while you work

I am so happy that I had asked Évi to stay on with us a little bit longer before starting her new job, just until the adults’ group was over.

Something happened on that last morning that brought tears of happiness to my eyes and a huge smile to Évi’s face. There was also lots of fun to be had for the whole group too.

This story is about a man who has been with us in our stroke group for about a year now. When he joined us he was so lacking in confidence that he would not attempt to do anything without Évi standing close beside him, although we all knew that he could do a quite a lot virtually independently.

At first we gave him the security of our presence until he gradually began to take part in some activities on his own, coming into his element one day when Évi was ill with flu and therefore not at work.

I had five people to look after and this client wanted to help me just like everyone else in the group always does when we are short-handed. This was the turning-point and this man began to thrive on the atmosphere of the group, he joined in the fun and we realised that we had a bit of a showman in our midst.

One day we discovered that this man had been in a rock band in his youth and the reason that he now returned to his elderly mother on most weekends was because the past members of this band visited him there!

The drum kit that he played over twenty years ago has long since been donated to a local secondary school’s music department but, as we discovered a few days before Christmas, despite a stroke his drumming skills have remained.

The husband of my client Waltraud, the singer and now author and book-publisher, plays accordion and mouth organ. Sometimes he arrives early to collect his wife bringing one or the other into the group to play for us. We sing along.

We had planned a Christmas sing-a-long

On the last morning before we finished for Christmas I gave out some jingle bells, triangles and the song sheets, and we were ready for off. Suddenly I remembered that we had a drummer amongst us so I quickly searched for the small table-top drum and presented it to Évi who was seated next to our drummer.

Both of them were beaming ear to ear and I was almost crying, and that was before we even began the first song.

The drummer was brilliant, he surprised himself and impressed our accordion player who is quite an expert musician himself.

I am so glad that we all left for Christmas with such a feeling of joy, with experiences of success, friendship, fun and a lust for life, with a smile in our souls.

That drum is now is a safe place, easily accessible and will be coming out again soon as I, for one, want to see our drummer smiling so brightly again and hear his drumming skills.

I believe that we all have to bring our own enthusiasms into the conductive group. Conductors need to use their own enthusiasms as a means to motivate and we have to discover what it is that motivates our clients to learn and encourage them to bring their own enthusiasms to the group and help to make all our souls smile so that learning, developing, spiraling upwards, are made all that easier for us all.
Posted by Susie Mallett at 22:37