Didicars from China via Middle England 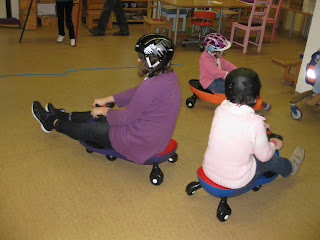 I just love it when I discover something when I am surfing the Net that I know immediately will be an absolute hit with our children (and some of the more adventurous adults).

The Didicar supplier that I found is in England and the person I spoke to there asked me how I found them. I quite honestly have no idea. It happened as I was looking for a bike I think, for someone in another country who had asked me about bikes for children with motor disorders. I never did find the bike that I was looking for but I did find the Didicar!

On the Didicar box it states that they are fun for “children from thirty months to thirty years, and more”. That is absolutely right, they really are lots of fun even for the over-fifties!
As there was still some money left from donations at the end of last year I was able to order four of these wonderful educational toys. Three are in the conductive groups to share with the integrated Kindergarten next door and the fourth has been shipped over to the new integrated Kindergarten in the city centre.

When I ordered these vehicles little did I know just how many of our children would benefit from the Didicar experience, this hand-powered driving!

Everyone in the conductive groups loves them and reaps benefits from using them, the adults included.

The cars come in a range of rainbow colours. They have two fixed wheels at the rear beneath the seat, and two wheels with a third stabilising wheel at the front that are turned by a butterfly-shaped steering-wheel. 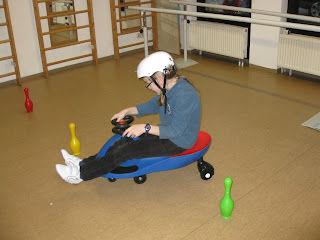 After initially accidentally fixing one of the steering wheels the wrong way round I fixed a couple of the others back-to-front as well so they could offer support to the children who have less control in their arms. I came up with a few other tricks, such as non-slip mats on the seats and Velcro straps around the legs to assist those who needed a little bit of help to get started.

The Didicars have been such a great success and already after just a few weeks of use the conductive team has seen improvements in both the cognitive and physical skills of the children aged from three to thirteen. These include improvements in coordination, steering and avoiding other drivers, making sudden movements and quick-decision making, and also the physical skills of grasping, turning arms stretching legs and keeping the body steady.

One important development in one child is her new found ability to join in in a group activity with joy.

It was fortunate that the team could afford to buy several cars at once as it is the group activity that the children enjoy most and they learn skills so much more easily as they drive together negotiating our self-made race-track. 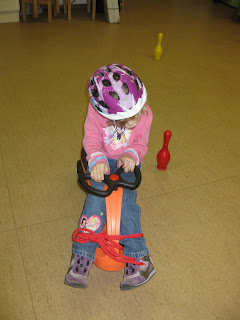 Not only did these skills develop, others life-skills shone through too

It was with Little Princess in mind that I had initially picked out these cars, I thought that I had at last found something that she would have to use both hands to steer. She rides her bike with only one hand on the handle-bars and she has been seen to do the same with her walking bike too. I thought with this Didicar she would have to drive with two hands and at first she did!

I have never seen such a despondent face as that of Little Princess when thought that she could not ride the Didicar. She is a determined little girl and as the others in the group whizzed past her it took her all of five minutes to do some problem-solving and get under way!

She realised that she needed the car with the back-to-front steering and a bit of help at first to keep her feet in place (we used a rope). And then she was off, beaming from one ear to the other.

Another five minutes later she knew exactly how much Didicars cost, where they came from, how I ordered them and how long they took to arrive from the UK. That is not at all bad for a child who has great difficulties with her speech. She had taken all this information in for a very specific reason, a reason I discovered the following afternoon when she arrived in the group. She told me that her Mum would be coming to see us at 16.00 hours and could she ride the Didicar when she was here? I asked whether this could possibly be because she wanted Mum to buy her one. She grinned and nodded her head. That is what I call enterprising! She can obviously do more than just a nod of the head when it comes to telling
Mum about what she wants!

On the day that Little Princess’s bright pink Didicar arrived Little Princess was at home nursing a bang on the head that she had received from an accident on her bike (she rides much too fast but just like many athetoids I know, she loves speed).

Jolly Professor decided to call his friend at home and ask her whether he should put her Didicar together as he was very adept with a screw driver; he said that he would deliver it too. He then asked her whether she would rather to do it herself when she was better. The answer came quickly, her lovely mate could do it, she did not know how long she would have to be at home, nursing the bump on her head, and she was so excited about taking ownership of her own car that she could not wait.

As can be seen in this photograph, Jolly Professor demonstrated his fine motor skills and his ability to read the construction manual that was not dissimilar to one from IKEA! He filled

Littlie’s pink car with lots of tender, loving care and it was promptly delivered a couple of hours later!

Several other children have since ordered their own Didicars to ride at home; even the cleaning lady has one for the grandchildren!

I doubt that it will be long before a third order gets telephoned through to Middle England.

I had to phone the company that supplies Didicars in England to organise an international delivery as there were no facilities to do this online. I had lots of questions to ask too and received the information that I needed about experiences with supplying the car to schools for children with disabilities.

I had just confirmed the order for Germany when the man who I had been speaking to remarked that he could hear that I was not a native of the land that I live in.

At this moment I knew what he was going to say next and realised that I too had recognised something of an East of England accent even though I knew I was speaking to someone in Warwickshire. It turned out that not only are we both from Norfolk we both come from Norwich, its county town. We did not attend the same school though!