Ten out of ten again for that German efficiency!

Having lived here in Germany for almost twenty years I should be getting used to the way in which the Germans prepare for the bad weather, but today I was really impressed by it yet again.

This morning I was up and attem earlier than usual as I had sensed that it was unusually quiet in the street below, a sign that snow has fallen in the night and therefore a few more minutes would be necessary for the journey to work.

At 06.30 it was still too early for the scritch-scratch of snow-shovels to be heard but there was that snowy-quietness in the air, but I had not quite expected what I saw when I opened the balcony door. The branches that hang over the railings were laden with snow, the roof-tops were looking like they were sagging under its weight and huge flakes were still falling. 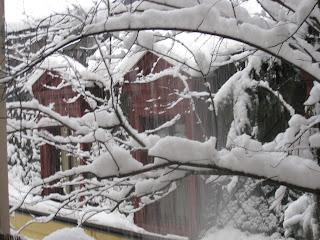 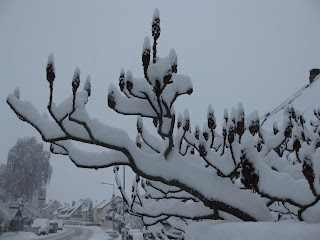 I skipped breakfast hoping to buy it underway, quickly wrapped myself up in ski-trousers, boots and jacket, and then with scarf and hat pulled on tight I made my cautious way through thirty centimetres (twelve inches) of snow to catch a tram. By this time I was about fifteen minutes earlier than usual. The only advantage that the fifteen minutes had was that I was at the front of the queue when forty-five minutes later a replacement (ersatz) bus arrived. This first bus, filled with sardine-like-workers, travelled the three short stops to the tram and bus terminal in more than half an hour but we got there in the end. Thanks to the snow plough that we followed.

Children and adults were being picked up at the tram stops by taxis that this morning were working for the city and had stepped in, like the buses, to replace the tram service. The buses were still running, a bit less punctual than usual but they were turning up eventually. 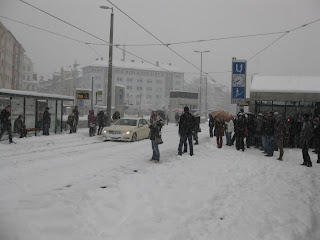 Just before the bus arrived the team of snow-shovellers had turned up to clear the tram-stop and the stairs to the underground station, of snow. By this time the road traffic was beginning to move more quickly and the thick white snow was becoming compressed and brown.

By the time I reached my place of work, only ninety minutes later than usual and only five minutes behind the children, the best part of the day was over. I was so happy that I had experienced it. 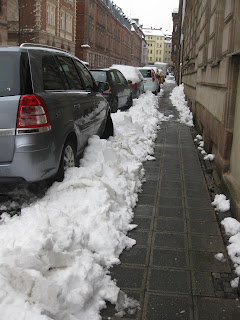 As I travelled home again early this afternoon, the roads were clear, buses and trams were running as normal and the snow was melting and avalanching from the roofs of the high, town-houses. The snow being so soft and wet that even falling from such a height it posed no danger, unlike the icicles that were falling off yesterday.

Yes, getting to work was a real adventure today and much more friendly than it usual is.

While standing like a sardine-in-a-bus I found myself next to the school-crossing lady who I have waved to from my bike for the past four years. She recognised me in my street clothes immediately so we got to know each other a little bit.

Bringing the snow in through the window 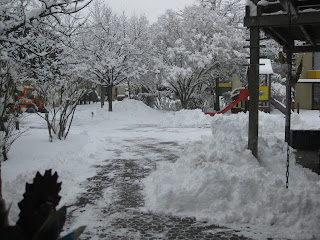 While the rest of the Kindergarten children were outside building a castle in the snow we brought Frisbees full of snow to the hand programme on the table. Two children, both  with muscular dystrophy, said it was too cold to handle without their gloves on, while two little girls, both with hemiplegia, worked away to their hearts’ content with cold fingers, to build a mini-snowman before the snow melted, even searching for bits and pieces to use as hats, buttons, noses and eyes. Unfortunately there was no space in the freezer to save them for tomorrow. 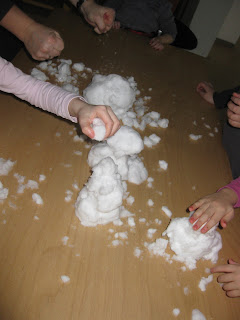 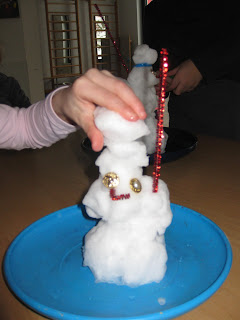 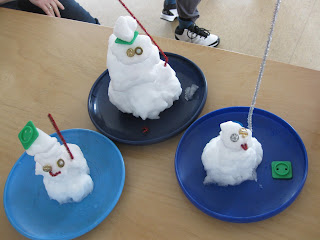