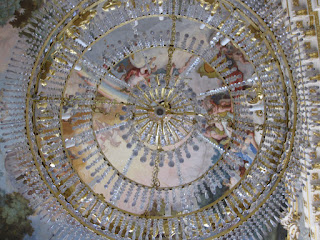 This is the day that Germany celebrate the reunification of the East and the West.

This holiday fell this year in the middle of the two-week-long Oktoberfest in Munich.

An experience I had not reckoned with!

I had every intention of spending a two-hour regional-train journey to Munich reading András Pető, the book recently published by Gill Maguire and Andrew Sutton.

I had not, however, reckoned with the wonderful experience that awaited me at the railway station in Nürnberg.

It was 6.30 in the morning of a bank holiday. Normally I would be one of only a few people out and about at such an unearthly hour on a national day off. 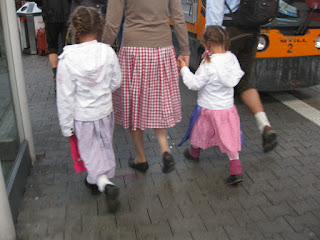 But not this day

The station was absolutely buzzing with beautifully dressed people. There were youngsters in their twenties, families with young children, and also the over-fifties, all dressed in their Trachten; men sporting Lederhosen – leather knee-length trousers with embroidered braces, worn with a checked red, blue, or even pink, shirts – and the ladies in Dirndl – layers of wool, cotton and lace of every colour under the sun. All the costumes were worn with the traditional accessories, of knee-length or ankle socks, hats, plaited hair, little bags and necklaces with Edelweiss decorations, and often traditional shoes too. 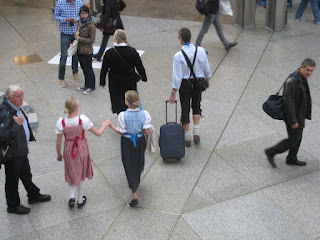 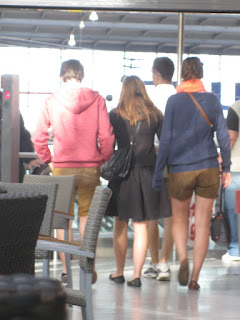 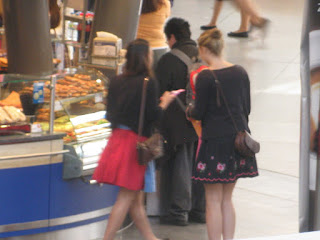 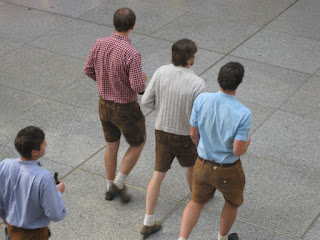 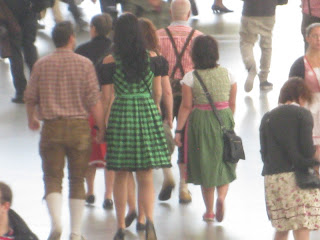 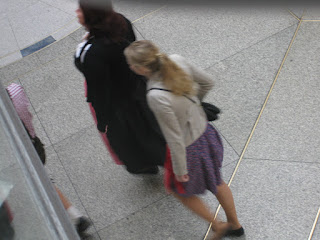 These people were either on their way to the Wies’n, where the annual October Beer Festival is taking place, or to join many landsmen and women in celebrating the unification of the country. It was sometimes possible to see from the clothes which were going where. 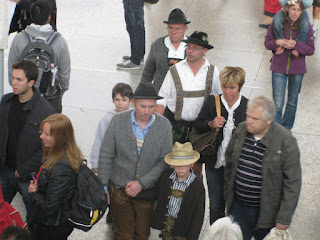 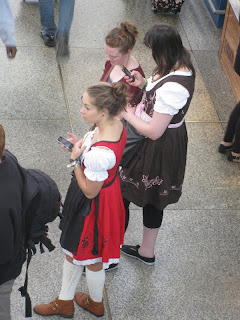 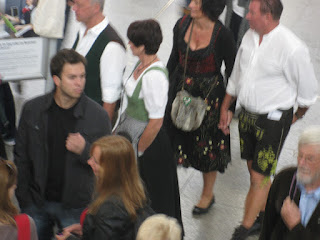 Some of the young adults had quite obviously bought their gear for the occasion, to attend the beer festival; others were wearing expensive, much-loved and much-worn clothes, clothes that are taken from the wardrobe to wear on high days and holidays such as Christmas, weddings, country fetes, village parties, and National Holidays.

When I saw all these people I realized why there were two trains leaving the station in the direction of Munich at the same time, these where specials laid on for the occasion just like it used to be in England when I was a child, and perhaps still is, for football matches!

I was pleased that I had arrived at the station early. I had planned to grab a coffee and a Breze for my breakfast but instead took the opportunity to board the train fifteen minutes before departure, thus securing myself a seat. I would arrive early enough in Munich to enjoy more of this spectacle for the eyes while enjoying a quick breakfast in a café.

Aboard the train I was mesmerised

People were speaking to each others, strangers boarding the train just struck up conversations with other, something that I have only rarely experienced in Germany. The stations along the route were all crowded with more Trachten-wearing travellers and accents changed and dialects became less easy to understand. From the Frankenland Nürnbergerisch that I understand it changed to the Bavarian tongue from the south of the county, that I find very difficult to follow.

My book was abandoned for a lot of the journey while I soaked up the atmosphere. By the time that I was enjoying my breakfast on Munich station the book was confined to its place in my bag as by now I was too busy people-watching. Munich railway station was buzzing. The place was swarming with people in traditional costumes going either this way or that, to join the fun of the fair and the beer tents or to join the more sombre celebration with the politicians.

I was in Munich for neither of these fests. I was there to meet friends from Hong Kong and spend the day being a tourist at Schloß Nymphenburg. 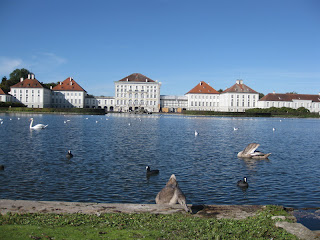 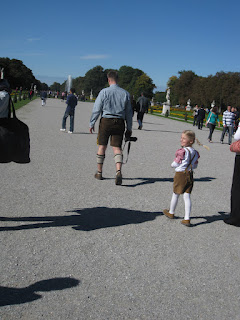 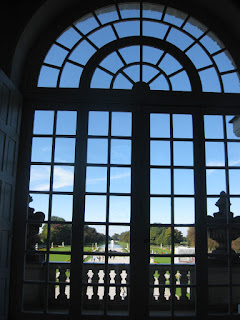 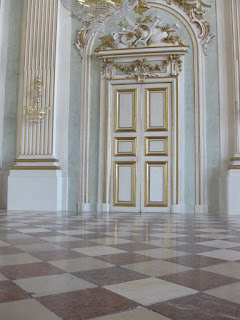 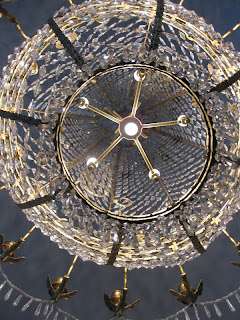 We were all delighted to have been able to enjoy Munich with the splendid traditional clothes, and many of these people were also to be seen enjoying the gardens of the Schloß and the delicacies of the Palm House restaurant at lunchtime.

What happened to my book?

I continued to read it, between dozes, on the double-decker train that I travelled back home on.

And on the way to work the following day!

More about that later!