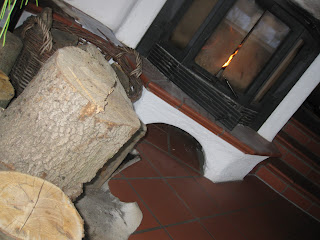 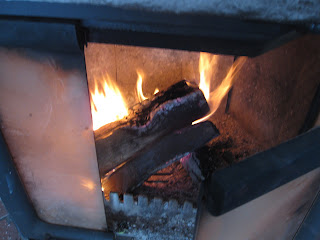 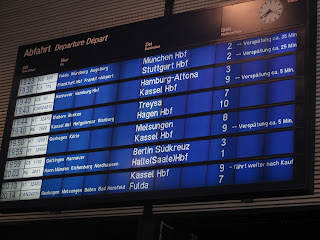 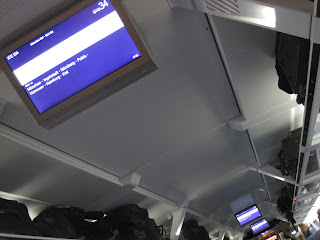 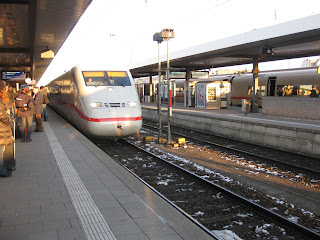 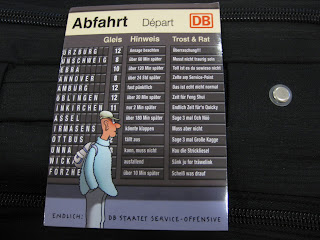 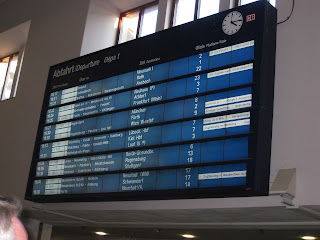 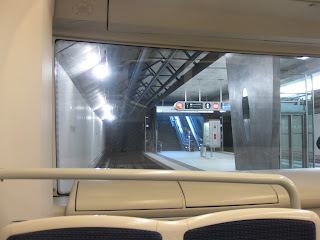 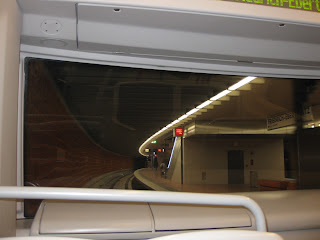 Before the deep freeze

Last Friday afternoon, although the temperature was only slightly below zero, I wrapped myself up in several extra layers before making my way on the first leg of my most recent journey.

Luckily I had anticipated that, the further north I should go, the more severe the weather would be. I had no wish to be stranded in the cold on a platform waiting for a train.

My journey began with seven minutes on a driverless train. Our new underground line with its concrete platforms, passages and entrances is stark and uninviting, but there is now no other direct alternative to the railway station as the tram line has been discontinued since the new underground line opened in December. So I grin and bear it. I love the concept of the driverless train. The carriages are modern and the views out of the front and back windows are great, but the décor is bare concrete! Not a mosaic, painting or poem to be seen as on the other Nürnberg Metro lines. It is therefore a short but desolate journey between home and railway station. Not only desolate because of the abundance of grey concrete but also because, whenever I have been on it, there has certainly been no abundance of passengers.

I wonder whether there are others who avoid this route despite being excited by trains as I am, because it is not very soothing for the soul - unlike the tram that has now disappeared.

I had a wisdom tooth removed a week prior to setting out on this journey so. I returned to work after sleeping for two days, knocked out not by the pain but by the painkillers but, just in case complications meant I could not travel, I had resisted any Deutsche Bahn offers of early bookings for cheap tickets. In the event there were no complications.

This turned out to be to my advantage. Just as a very helpful man at the booking office, situated in a beautiful room that had been until fifteen years ago the station restaurant, was printing my tickets for a route that he had found me with only one change and no long waits, he received information on his screen that would have made him exclaim “Oh dear!” had he spoken English

The train he had suggested was not going to pass through Nürnberg after all. So what was I to do? The regional express would get me to the next stop in time to meet the re-route ICE but I would arrive too late in Kassel for my connection.

We got busy planning an alternative route, deciding between us on a two-hour-late arrival at my destination. I would have three hour’s waiting, divided between Nurnberg Station, where I drank coffee, read my English newspaper treat, and edited some text for my next book and a presentation to be given in Sweden by a colleague - and Kassel Wilhelmshöhe where I tried to keep warm in the book shop, both browsing and buying.

With the comfortable ICE train journey and a long and cold wait in snowy Kassel behind me I boarded the last train, a red, regional express travelling eastwards in the direction of Hagen that left spot on time.

I arrived at my destination punctually although two hours later than I had originally planned. I was welcomed warmly despite the temperature having plummeted on route to minus fifteen.

Over my few days working up north the temperature gradually dropped. One morning when out bright and early in order to catch the 7.15 a.m. bus, we were greeted with minus seventeen and frozen nostrils but also treated to a lovely red sky as the sun rose. Another morning welcomed us with minus twenty.

It was on that morning that Laddo, my client, and I decided to abandon the room that had been allotted for work and placed the gymnastic mats in front of the stove that I then lit.

I asked Laddo whether he would like to do it but he refused and said that he was astounded that I knew how, and asked when I learnt. I explained that my paternal Grandmother had taught me when I was five-years-old how to make paper sticks and how to light a fire with one match. I have been able to do it ever since, even when it is freezing cold with no wind to speak of.

We were soon doing a bit of egy, kettö, három to the crackle of dry wood and with yellow flames, that soon turned to orange, warming our backs and feet.

Laddo continued to wonder at my versatility and I at the diversity of my work!