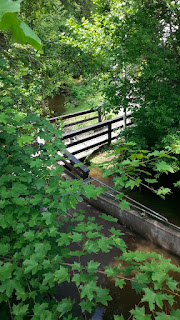 I cycled to work this morning wrapped up for winter weather, it was still drizzling and the temperature had not yet reached double figures.

I took the detour as planned to check what was going on in the village near work. I am happy to report that the water had receded, the village pond was full to the brim but the Bach was no longer flowing over the footpath; all the roads were open.

The sun came out at 11 o’clock and we all cheered, even the children noticed. We have just had two week’s school holiday and it rained almost every day and it was freezing too, so the children have been more aware of the weather than they usually are.

As I cycled home at lunch time I had another peer over the bridge down to the under path, and what a difference twenty-four hours has made. I could see the stream still flowing fast but no longer occupying the whole of the space that it usually shares with a river bank and a footpath. 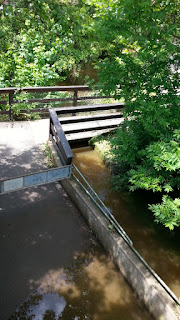 I do so hope that there is also a big change in the water-levels in cities like Passau, where there was a 12 metre rise in the water-level yesterday and it was still rising. Let’s hope that it is a bit lower now, even a fall of just a foot, 30 centimetres, can make a difference as I saw today.

A colleague’s cousin has just moved out of a shared flat in Passau and he is the lucky one. His new accommodation is on ground just a few metres higher than the last one and he has dry feet. Unfortunately for his old flat mates their flat is full with water, they have few dry belongings and nowhere to live. There are thousands of other people in this position today.

Usually we talk about Sponge Bob, Spiderman and fairies of various kinds in the Kindergarten but not today, the weather took precedence, especially when the sun came out just in time for playtime. Even the little four-year olds were discussing the Hochwasser having seen a special report on the television last night. One boy told us that he was late for Kindergarten because his mum had got lost taking a detour around the floods.

The forecast looks hopeful with some warm sunny hours, but there are also thunderstorms forecast before the weekend too. I am looking forward to cycling tomorrow with some more seasonal clothing on.