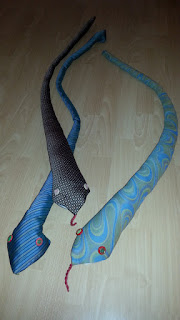 It is Kindergarten time again. The work with the small children seems to come round again so quickly these days.

I always try to prepare something new for the littlies, to make them laugh and give them something to play with, and motivate us to create artworks together.

When I was out the other day I bought myself some old ties at the Oxfam shop. I had an idea for some new toys.

Yesterday afternoon I found myself with a few unexpectedly free hours. My meeting with the designer for my next book had been postponed for twenty-four hours and I had thought that I would do some drawing or painting but, when I spotted the ties hanging up where I had left them to dry, I decided to be crafty rather than arty.

A few stitches, a bit of stuffing and a six buttons later, I ended up with three new friends to join our Pető group.

They were immediately adopted and almost before I got in the door they had been named – Spotty, Stripy and Retro!

The snakes were all over the place today, up jumpers, under plinths, round necks, climbing wall-wars and generally slithering around! 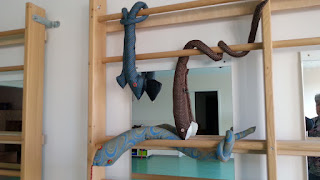 I am going to put up a request in the office tomorrow to collect old ties and then I can make a few more to sell at the summer fete. At one Euro per tie and an old cushion for stuffing this was quite a cheap morning’s entertainment. I expect that Spotty, Stripy and Retro will be with us for quite a long time, and perhaps even Dino will come out and play with them too.

Hi thanks ffor posting this