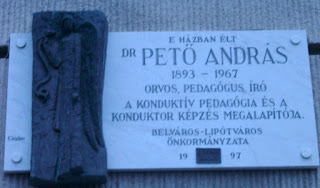 Well, it is not exactly a weather report, I am just spending a few moments this Sunday morning to think about those people, in some parts of Germany, Austria and Hungary, who are still feeling the effects of the enormous masses of water that passed though my part of the world earlier this week.

In some areas the predicted highest water-level is still to come, one of these being Budapest.

While I was investigating on line what the water is up to in Budapest I discovered this video clip, showing the high water in the Danube, that is obviously taken from the number 2 tram that runs along the Pest bank of the river.

The number 2 travels right past the house with the angel plaque on the wall where András Pető used to live, in Balassi Bálint utca.

I wonder whether the water is lapping around the back of Parliament House by now and whether it is encroaching on AP’s old home, I do hope not.

Already the bill to restore the flood-damage in Germany alone is running into millions of Euros, let us hope that further along the Danube, and on the Elbe, that the flood-waters recede quickly, thereby lessening the amount of damage and upset for the people.

Those already clearing up are totally exhausted, many are without homes.

Not exactly Memory Lane but certainly a Memory Line. Your posting certainly dredged up a few memories of the no 2 tram route. I have just shared one of these on Conductive World: