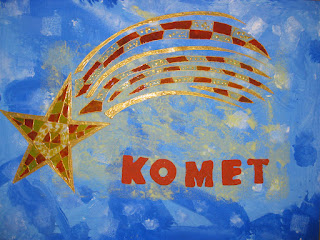 We have been snapping away since the big hole was dug, when the children were so excited because they thought we were going to have an Olympic-sized swimming pool on our doorstep.

We watched closely when the foundations were laid, when the lift shaft was cemented in, when the wall units were delivered and when the second floor began to take shape.

It was all happening so fast

Now, at the beginning of August, the rafters are up and the Richtfest (rafters-fest) has taken place. This is a party given for the builders by their boss to celebrate the completion of the first stage of building. There was the traditional speech from the rooftop, the traditional pig-roast, lots of silly games and some lovely singing from the children.

Moving the Kindergarten to its new home is planned for around Christmas time and lots of thought is going into how the rooms will be furnished and decorated.

I offered my services to the Kindergarten for a few afternoons when I had a couple of hours free between groups. I did not really wish to cycle home and back again so I was looking for a job to do.

It did not take them long to decide how they could put my skills and time to good use, to think about what was needed. The new Kindergarten would need a new sign and even perhaps a new logo and the children could design it with me.

The end product heads this posting. This and the following photographs show the work in process. Each week two or three children donned their painter’s smocks and depending on their age and skills contributed what they could to the art work.

We began with three three-year-olds daubing shades of blue on the canvas with huge brushes. This was followed by two four-year-olds gently dabbing sponges soaked with yellow paint within a taped off border on top of the blue. 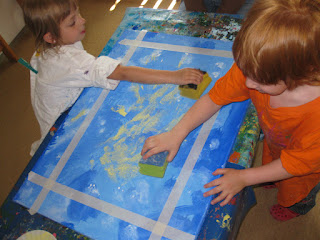 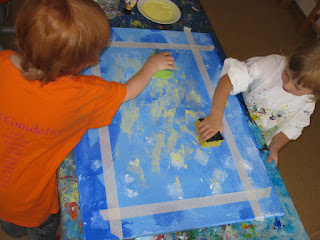 Each week the creation was left to dry then hung in the Kindergarten for all to see how it was developing, and to allow the opportunity for children to talk about the different stages and what they would like to do next. Time for the Komet

It was decided that the comet should be executed in a different medium and in the end we decided that window-colours would make an ideal contrast, with lots of shiny gold and yellows on the matt blue-and-yellow background.

The pre-school children and the five-year-olds were chosen for this job. This work was spread out over two weekly sessions to allow for drying between colours, to prevent smudging and to have the optimum level of concentration! 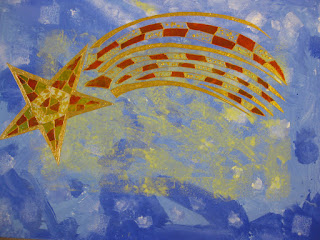 With the comet eventually glued in place it was time to think about what to write on our house-sign.

We could not put a huge canvas through a printing press but we could print on it with individual letters.

I remembered that years ago I had bought some sponge letters about two inches high that would do just the job, if only I could find them. I found them quite quickly with very little effort amongst a box of old paint brushes.

But would we find the letters that we needed?

Yes, despite finding that only half of the letters of the alphabet were left in the box, the letters that we needed to print KOMET were there. 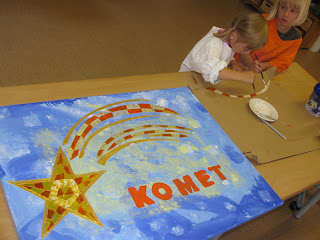 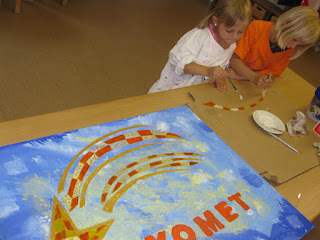 We had decided to wait a while before adding any more information to the sign as, with the addition of a Petö/Montessori crèche to the establishment, it is quite possible that the building may be be called Kinderhaus and not Kindergarten.

We will wait and see but, even though the final decision on the name has still to be made, the sign was hung on the door of the yet-to-move Kindergarten on the morning before the Richtfest (rafter-fest) took place. It was there for all to see when they arrived to party with us! 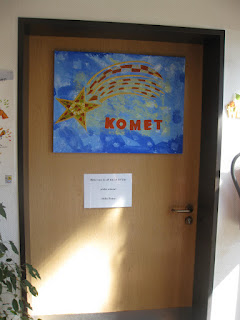 Thank you Susie for this vivid account. Apart from the (from you) usual story of conductive pedagogy/upbringing in practice, three things leap out at me on the 'policy' level:

- there is still healthy investment in Germany
- linked with inclusion and
- with the conductive work collaborating closely with a different school of education.