Getting crafty with young adults 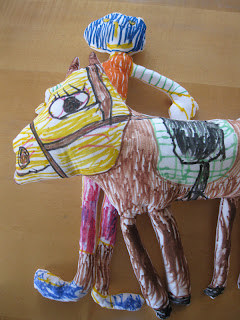 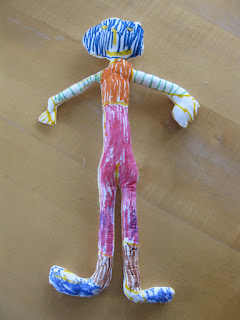 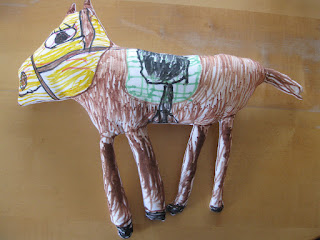 A lot of trust was needed with an athetoid client’s foot on the pedal when I guided material through an electric sewing machine, but it worked.

As you can see from the results above it worked very well, but unfortunately I had no hands free to take any photographs until we were finished.

While working at the sewing machine I sometimes found myself saying stop a bit louder than I really wanted to and I also had to quickly explain how going faster on a straight stretch is a bit like doing the same when driving a car and is not always the safest way. We decided to go slowly so none of my fingers got stitched to the fabric!

We found a happy medium along the straights and the precision and timing that developed when stopping and starting amazed even me. We became a very proficient team by the time we had produced, between us, a couple of stuffed toys as gifts for Laddo's young friends who now have babies and young children of their own.

Laddo is an artist, but just like me, he does not really feel like painting pictures at the moment. During my recent visit to work with him I could not really motivate this young man to do anything really except learn to ride the buses and trains preparing for a new three-hour journey that involved three changes.

He has astounded us all by taking that all in his stride, but he just refused to get interested in anything else.

Except that is for stuffed toys!

Here is something I made earlier!

When I arrived at Laddo’s house I just happened to have a couple of examples with me that had been made by our school children. The only time in two weeks that I saw Laddo’s eyes light up with just a small amount of interest was when I showed him these partly finished toys. He was hooked and he named a couple of people who he wanted to make some for.

It took Laddo a whole week to find the material he needed, all he had to do was to ask his Mum but he kept forgetting. Once he had it deciding what to draw on it was no great problem as he has been creating paintings with me since he was seven years old and he does not lack ideas. Once we had the material we were well away, but he kept forgetting it!

Forgetfulness is a problem that often causes difficulties in Laddo’s life. He forgets just about everything, although these days he sometimes remembers what he ate for his lunch he still forgets to put on his shoes, load his mobile phone, put money in his purse and many other much more important things. Fortunately he does not forget everything that he has learnt, but he forgets all too often that he should actually use it all. He needs reminding, a lot! Interestingly he never forgets where he has to go on a bus or on a train. He does it once and that’s it he knows. For all the other stuff we write lists and stick them inside his wardrobe door!

There is often a big battle in his life at home and work because of his forgetfulness. Everyone knows what he can do and all have high expectations of him. Laddo just simply forgets to do his best most of the time, but then he suddenly surprises us all with his capabilities and knowledge, like when taking his tablets, and when using the sewing machine to make his soft toys and later using an ordinary sewing needle to sew up the gap where the filling went in.

I guessed he would manage the needle and thread as he had shown me earlier in the day how he can now pick up, with his index finger and thumb, the tiny tablets that he needs to take daily. Life gets easier for Laddo and more independent and luckily his tablets are one thing he never forgets so as he practises that movement everyday he can transfer it to other uses, like sewing.

A stitch in time

A colleague, from years ago, and I have both got tales to tell about athetoid clients who learn to sew. We are thrilled by the success that we have seen in this craft by several of our clients. It really is a sight to see and it is surprising how many athetoid clients I know who really do love to sew, girls and boys, men and women, and who are quite provicient.

Laddo is one of them

Laddo’s dad has a workshop and years ago in our early years of conductive upbringing Dad made Laddo a huge needle. He learnt to sew cross-stitch patterns and made these and threaded-bead pictures as presents for aunties, grandmas and sisters. It never was a problem for him learning which side of the cloth to work from, a problem that occurs more often with diplegic, and sometimes tetraplegic children. Surprisingly it did not take long before he could also hit the right spot on the fabric with the needle, despite his shaky hands, arms and body.

It is always such a pleasure for me to watch my athetoid clients sew.

Just a couple of weeks ago Little Princess completed a hand puppet completely on her own, sewing the two pieces together with only help to thread the needle.

I watched her entranced!

Laddo needed a bit of help to hold the stuffed toy as he sewed the last bit by hand with a needle and thread, but the sticking in and pulling out of the needle he did alone. What’s more he only pricked his own finger once and mine only got pricked twice.

All in all he did very well and with a little bit of effort on both our parts we got enough motivation going to make the toys pictured at the top of this posting.

We were a bit limited for colours as many of our fabric pens that had been left in the cupboard unused for several years had dried up, but we managed well enough.

I am rather excited about seeing our client’s art work taking on three dimensions. I think we will all be doing a lot more of this! It is such a nice way for children and adults to produce something useful with their creative talents.