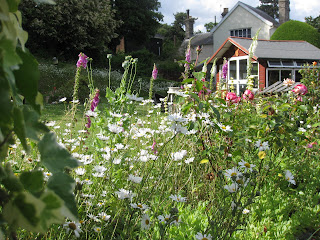 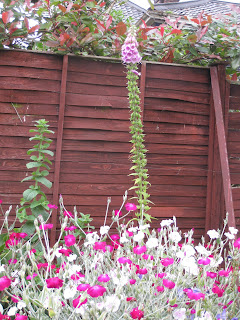 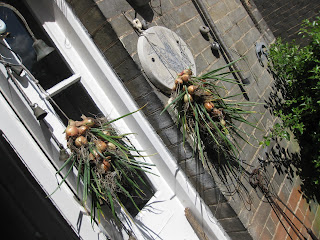 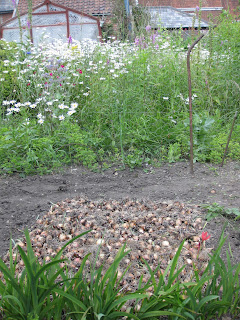 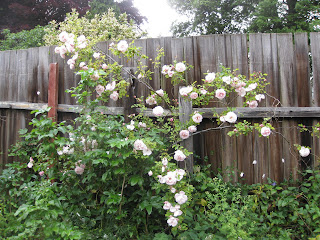 Home for a long weekend

Of course I do not rue the day that I went home, over two weeks ago now, to help my Dad after an operation on his hand to release the nerve squashed in the carpal tunnel. I do, however, rue just one moment of the following day, when I went out into Dad’s lovely garden, to pick some flowers for the kitchen windowsill, wearing just my shorts, a short-sleeved shirt and no gardening gloves.

When I work in my Dad’s garden I am nearly always well covered, from head to toe. At my Dad’s house, stored in my childhood bedroom, I have gardening gloves, hats for all seasons, several thick, long-sleeved shirts, long trousers and sturdy shoes.

I always wear these clothes for gardening but I do not change into them when I just go out to pick flowers.

Flower picking is something that I often do on a whim, even when wearing a summer dress and sandals. It is something I always joined in with spontaneously to help Mum as she made bouquets to take to market.

But not any longer! Those days have passed for ever.

From now on I will put on my gardening armour, whatever job I am doing.

When I was at home at the beginning of July, on a flying five-day visit, I did lots of proper gardening, things like harvesting shallots, weeding the strawberries, the parsnips, the asparagus and beetroot, and tying up the roses. Things that I knew, if left undone, would be a worry to my Dad during the next week or two as he recovered from the operation on his hand. All of this work I did while well wrapped up in my gardening-armour. Not a stinging nettle, not a rose thorn, not even a thistle, managed to penetrate it.

The nice bits in between

I have been picking flowers in this garden for forty-four years! My mum and I used to make gorgeous bunches of country-garden flowers that she sold on the car-boot market. I still make up bunches for myself, my Dad, the neighbours and family and friends, whenever I am at home. Mum planted her garden with all sorts of unusual things to make these bouquets special.

Just as Mum always did, this time I also picked a few sprigs of rue to use as greenery in my flower arrangement. Its silvery leaves and yellowy flowers looked good amongst the lilies, marigolds, margaritas and roses that I had already found.

While I was picking the sprigs of rue I decided to give the plant a bit of a tidy up. I thinned it out and shook the tangled stalks apart that were heavy with rain water. The plant was beginning to hang down on to a lower path, between the flowerbed and the vegetable garden so when it rained it drooped and then brushed against our legs. I chopped this all down, with bunch of flowers in left hand and secateurs in the right, and by the time I had finished giving it a good shake and a trim it was looking quite a picture again.

I thought about Mum and how she would like to see that I am caring for her plants.

I wonder whether Mum had known

I did the flower-picking on Thursday, my first full day in Norwich. On Friday it was a dull day, colder and windy so I spent the morning indoors, helping dad and making model houses, N-gauge, for my railway layout. It was while fiddling with the little houses that I first noticed dark red blotches on my arm. I suspected that it was due to an allergy to something that I had touched before breakfast. Was it the bleach, the glue, the washing powder or the lilies that grow beside the rose, that I tied back to stop it fluttering in the wind? I suspected at first it was the lilies or the bleach but the patterns on my arm indicated a more feathery plant.

By Saturday morning despite a day on Friday, of modelling and no gardening, and lashings of calamine lotion, my hand and arm were very red and swollen. And they hurt - inside and out!

I jumped on my bike and took myself to the walk-in surgery in the city centre. They confirmed a plant allergy and suggested anti-histamine, and to continue with the calamine. I was glad about that as the white, chalky zinc-oxide prevented me from seeing damaged skin and therefore I did not worry about it so much as I continued my work in the garden.

On Sunday there was no improvement, in fact I believe that it was worse, so I jumped on my bike once again and returned to the doctor. I was told to carry on with the same treatment, which in the end turned out to be the right thing even though at that time I did not know what the cause was.

I wonder whether when my Mum planted the rue in her garden she had known that not only is it a herb and a pretty cutting-plant but that it is also very harmful to the skin when combined with sunlight.

I returned to Germany on the Monday, with my arm covered in calamine and protected with a sock and long sleeves despite the heat. As soon as I was home with access to the Internet I went Googling for names of toxic plants that cause skin irritations.

Out of a list of hundreds I discovered about twenty that grow in Dad’s garden, seven of which I had had close contact with, including parsley, parsnips, lilies, asparagus and potatoes leaves.
It was not until I got to the R’s that I found the culprit – common rue! Rue, the plant that I had given a very thorough pruning with my right arm four days previously while picking a beautiful bunch of flowers.

My fast track course in photo-toxicology! 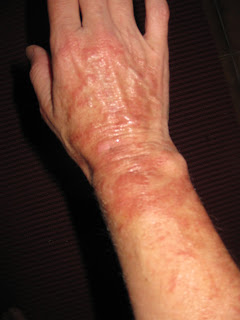 What a great thing the Internet is. I was able to find out exactly what had caused the inflammation and blistering on my arm and was armed with both the Latin and German names when I turned up to see a German  doctor on Tuesday evening after work.

By this time I had a very red, swollen, blistering and throbbing forearm, a few red, blistery patches on my left wrist and some more on both knees!

At least I could now say with confidence what I thought was wrong with my skin. It looked like I had caught the lurgi, but I had in fact just rued the day!

So out came his iPhone and together we Googled Weinraute (Ruta graveolens). He agreed with me straight away, although he told me that the hairs of the processional oak-moth caterpillar can also have the same effect. However, I knew it was the rue.

I came away with cortisone and anti-biotic gel to rub in the “burns” and a week later a skin specialist advised the treatment to continue for two more weeks when a fatty cream can then be applied for many months to come. The specialist also advised 50plus sun protection cream until the spring, (I use this when I cycle anyway). I was told that those are second degree burns on my arm and that hopefully they will eventually fade.

This drama all began over two weeks ago. My dad has since had the stitches removed from his hand; he is pain-free and is recovering movement very well. Yesterday was the first pain-free day that I have had since the red blotches appeared and the sunshine began to react on my skin, and today is the first day that I can type two-handed without tingling in my fingers and a burning feeling in my wrist. So it is time to get blogging again!

When I return to attack Dad’s garden again in September I shall certainly be wearing gardening-armour whenever I step outside the back door!