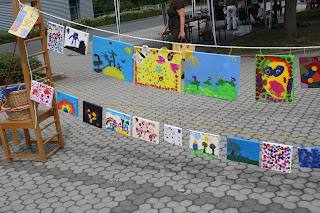 It was Mid-Summer’s Day and at the centre where I work it was also the Fiftieth Anniversary Summer Fete and, to top it all, the sun shone all day!

It was also my 55th birthday!


The school children have been asking since December last year, when we had our first conductive sleepover, whether they could do it again. It was not easy to find a day to suit everyone but with the Summer Fete a date in everyone’s calendar we went for it.

These children sadly do not have as many opportunities to stay over at a friend’s house as do their non-disabled peers though, since they tried and tested it with us last year, there have been quite a few other successful nights out!

Jolly Professor and Little Princess are actually getting quite adept at organizing a weekend together and then announcing it to their parents later. Just like many children do. They have realized that it is possible and they really enjoy it, especially with us when we make a real party of the whole event.

This year they made a birthday party for me out of the event and they even allowed me to sleep in another room after I had played and read and wished them all goodnight, of course! I was still to sleep on the floor on the big blue mat, still to be snuggled in my sleeping bag but I did not have to wake up in the night to accompany anyone to the bathroom or listen to anyone snoring. Instead I got up early, opened my cards and prepared the breakfast table. I made an early morning cup of cocoa for anyone who was up and I played with whoever got up early before we went to wake the late risers!

We had planned breakfast for 8.30am, with other colleagues’ cycling over early to join us before making their own preparations for the fete.

We had organized to stay overnight with the children to coincide with the Summer Fete so we, the conductors, only had to give up one weekend. We had to be there for the fete anyway. This also meant that the children had lots to keep them busy before their parents took them home.

A week of preparations

Our contribution to the fete was to be an exhibition of out art work and a bit of street artistry - that’s chalk drawing in frames drawn on the ground. Just like in the scenes outside the park gates in the film Mary Poppins, where Julie Andrews, Dick van Dyke and the children jump into the paintings to take their ‘happy holidays’ eating tea with the penguins and riding on fairground-racehorses!

In the days before the fete our children put finishing touches to their paintings, helped to design flyers on the computer to distribute at the fete, and they made detailed plans for the sleepover. Right down to discussing who was to sleep next to whom?

On Wednesday afternoon the children planned the meals, on Thursday they each made a shopping list that hopefully they could read when in the shop, and on Friday each child took a purse filled with coins and notes, and their own list, to the shops, accompanied by me, Évi and a couple of helpers. We walked the half-hour there and back with two children taking their walking-bikes.

Despite integration, inclusion and conductive upbringing, these children do not get to go shopping as much as they would like, so they attacked this outing with glee and it was a delight to be with them.

They had decided to take my bike trailer with them to carry their wares instead of each carrying a shopping bag.

We must have looked a sight to passers-by, just like Enid Blyton’s Secret Seven off on a great adventure. The sun was shining too just as it always seemed to do in Enid Blyton’s wonderful stories.

The children were brilliant in the supermarket, calling one or the other of us whenever they needed a hand, otherwise doing quite well on their own with lists attached to shopping trolleys and walking bike, and purses hung around their necks.

With the food stored in the fridge on our return the children went home for just one more sleep before their next adventure, sleeping-over conductively!

Not only did I get to sleep in a room on my own on the big day, I also got a couple of hours off during the eve of my birthday. I was sent away and I had to promise not to come back until I was called. So I took my book and made myself comfortable in the office with a pot of tea and some biscuits.

The following morning, after I had prepared the breakfast table, I was sent away again for ten minutes.

I returned to find the results of the secret evening session. A wonderful flower arrangement adorned the table and on the table in front of my place there was a train, a cake train decorated with sweets and creams and chocolate! There was also a pile of presents!

Everyone had had a hand in making the train the evening before and had taken photographs to prove it!

Yes, I must admit I had smelt the baking but I had no idea that I would be receiving a model train to eat. 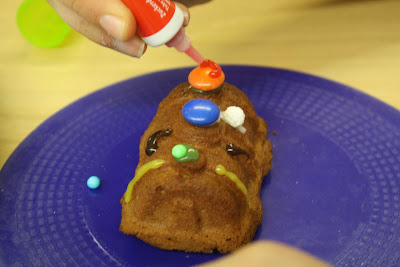 What a wonderful secret to have kept, no one had said a word.

Taking it in their stride

After making our own toasted sandwiches for breakfast, using everything under the sun and in the fridge left over from the night before's pizzas, from bars of mint chocolate, bananas and pineapple, cheese, ham and tomato, we prepared ourselves for the fete. 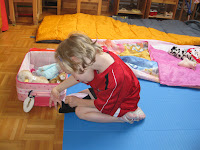 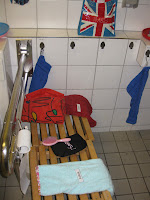 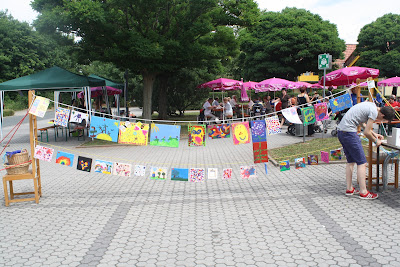 With suitcases packed, teeth cleaned and glad-rags donned, we transported our paintings and games to the fete, only a few metres away from our conductive Bed and Breakfast.

Soon everyone was beavering away and the time flew by as we prepared for our al fresco art exhibition and drew frames on the ground in the street-drawing area.

Soon, one-by-one, the parents arrived and it was so interesting to hear which stories about the conductive sleep-over got retold the most. I really enjoyed observing that this second time round the children just took everything in their stride. No one had asked what the time was or when the parents would be coming, no one even mentioned what the family would be doing at home without them, and, fortunately, no one had been so excited that they could not fall asleep.

The children have really grown up in the last six months, they have learnt so much and have become so independent. They all enjoyed every single second of our conductive, birthday and anniversary sleep-over and fete.

But I know that I enjoyed it even more than they did. It was wonderful not to wake up on my birthday alone at home. I think I can honestly say that it was the best birthday since the days of Enid Blyton-style birthdays on the beach.

We cannot wait until the next sleepover, perhaps on Évi’s birthday!

What fun! Love the way they took care of you on your special day...how sweet. Happy Birthday !

I have missed our "chats".

Yes, it was lovely to be with the children on that particular weekend. It is so important having these real-life conductive experiences with them.

I hope you and your family are well and I thank you for being a faithful reader.