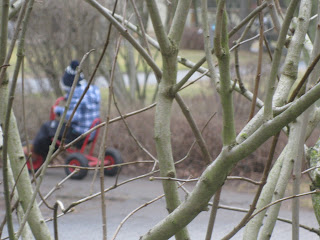 "Thursday morning's playtime"
Mozart, Petö and singing souls
My adults’ group for multiple sclerosis listens, relaxes, and practises a soul-healing breathing rhythm, and some members even fall asleep while listening to 6.43 minutes of Mozart.
I put the CD with the Andante from Mozart’s Concerto No 21 in the player, begin quietly counting the 4/4 rhythm, talk them through a few deep breaths in time with this lovely music, then, I either take my own place on a mat on the floor or, as I did today, I rest my elbows on the table by the window, rest my chin in my hands and silently observe.
Click here now to join me in listening to this Andante as you read the rest of this posting:
http://www.youtube.com/watch?v=rR9HiVhhT8Q
I do not observe my adults’ group. I observe our lovely integrated Kindergarten children in the garden at play.
On Thursday last week it really made me smile inside and out to watch them. How lucky all these children are to be in this integrated group.
The scene that made my soul sing
A six-year old boy with muscular dystrophy, who by the way is Turkish, was pedalling away on a three-wheeler bike and was going faster than ever before because he was being pushed by a three-year old girl
from Syria who has no disability. She is however very little!
These two were being chased by another six-year-old, this time from Greece, who was whizzing along behind like lightening in his manual wheelchair. Tomorrow he could be doing the same on his bike or on the bobby-car, but today it was wheelchair-practise day.
Bringing up the rear in this chase was a German boy who is six years old and has ataxia. He was following on a jumbo-sized blue bobby-car. Bobby-cars are made in Nürnberg so we have a great variety of them in the garage, some even have trailers and water pumps. Today it was one with go-faster stripes!
All these children completed their thirty-metre circuit at least three times while I had my chin in my hands happily listening to the 6.43 minutes of Mozart.
I have known the three six-year-olds for almost three years and it brought tears to my eyes watching them having such fun.
The German boy was so shaky three years ago that he could hardly sit on a bobby-car let alone whizz around on one.
The Greek boy had never sat on a bike, in a wheelchair or on a bobby-car when we first met, because nobody had expected him to be able to. Now he is walking around indoors with four-point sticks and singing Frère Jacques in four different languages, Hungarian being his favourite. Two years ago the powers-that-be wanted to stick an autistic spectrum label on this child. I think that we have passed that hurdle now.
The Turkish child, who was once so shy that he would clamp his hands over his ears so tight when we sang in the group so he could not hear, just in case he would be asked to sing with us, stood up in his crocodile costume two weeks ago at carnival and told us that there is a song about crocodiles. He was waiting for an invitation to stand in front of the whole group and sing it! I could not believe my ears when he actually did it. There are no hands clamped over his ears anymore.
Soon these children will be off to school
I will miss my 6.41 minutes of soul-healing observations of them through the window, just as I will miss them in our “Petö” group, as they call it. But I am sure our new children will bring me just as much joy as these three and their playmates have done.
Notes
Mozart - Wolfgang Amadeus Mozart, piano concerto no 21 andante (“Elvira Madigan”)
http://www.youtube.com/watch?v=rR9HiVhhT8Q
http://www.youtube.com/watch?v=rKZr3ExeXUc

PS
This Andante by Mozart is my favourite piece of music.
The version that I have was recorded on 12 June, 1989 at the Italian Institute in Budapest. That was just three months before I first arrived in that lovely city! The CD was given to me as a present when I first visited Germany in 1993 and I have been playing it in my MS group in every session for the past eleven years!
Jenö Jandó, piano
Contentus Hungaricus, consisting of leading members of the Budapest Symphony Orchestra
András Ligeti, conductor
Posted by Susie Mallett at 22:37