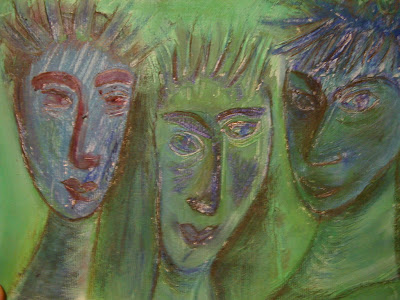 Are we creating the Conductive Poet’s Corner (or is it the Poet’s Conductive Corner or even the Conductor/Poet’s Corner)? Are we following in András Petö’s footsteps, not only through ”conducting”, but also by learning , as I suspect Petö knew, how to express ourselves and describe the feeling of Conductive Education through poetry. Maybe through reading it or through writing it, we can get in touch with our own innermost selves and that of others. We can discover the importance of the “conductive Seele” and be able to be more successful in our work with people. Could this be what made Petö so successful in developing his work and his institute, could it be his poetry and play-writing?
Despite what many describe as his strictness, I believe that Petö knew how to get into contact with the inner depths of the people he was working with. He knew about the Seele. He wrote about this extensively in his book "Unfug der Krnakheit -Triumph der Heilkunst".
When I speak of creation of a "Conductive Poet’s Corner" I am referring to Andrew Sutton’s latest blog where he states that poetry has the power to move people emotionally, just as Conductive Education has the power to do just the same. People reading poetry expect to find a bit of Seele on show and people who write it often do so to express their deepest emotions. Reading or writing poetry one gets in touch with emotions that would not perhaps be otherwise revealed or discussed so openly.

I often mention the Conductive Seele in my blog and I wonder whether maybe poetry really is a way to reach a wider readership and to get across that feeling of what Conductive Education/ conductive upbringing really are.

Poetic practice
I have been using poetry "conductively" in my work for many years, especially in my Multiple Sclerosis groups. In 2000 I began an MS group in Nürnberg. The majority of this group were artistically inclined, musicians and artists and poets, and an English teacher. This developed into a very unified, motivated group, which gave me the perfect opportunity for experimentation in the last half-hour of the programme. This was the time when we stopped the exercising and played games while enjoying a cup of tea , created paper sculpture or had self-made origami boat races in a bowl of water on the table. It was a time when we would paint group pictures of island cities and discuss what it would be like to live there. We would create objects from glittery pipe cleaners and explain their obscure uses to the rest of the group. Often I would dictate poetry from Goethe, Schiller and sometimes Ringelnatz in order to practise writing skills, listening skills and concentration.

I found this piece about Schiller in the Internet, it could be something that András Petö himself could have written about any one of his various interests, including Conductive Education.

Friedrich von Schiller 1759 -1805
Leading German 18th-century dramatist, poet, and literary theorist. Schiller's mature plays examine the inward freedom of the soul; his first play The Robbers (1781) was a landmark in German theatrical history and spoke of the ideas of liberty. According to Schiller, a play is not a means to enjoyment; it is the very thing enjoyed. Aesthetic education is necessary, he argued, not only for the proper balance of the individual soul, but for the harmonious development of society.

Instead of me dictating a poem , or sometimes afterwards, the group would create one of its own, often influenced by the style and contents of one they had just heard but sometimes not at all.
These poems were rarely about Conductive Education, there were many themes. They were sometimes very jolly, taking on the Ringelnatz style, sometimes serious and “Goetheresque”. It depended a lot on which group member threw in the title or the first line, on the day of the week and on who was present in the group. The style of the poem depended on how difficult it was for people to express themselves and who created the previous line that they must follow. Some clients mentioned the conductors and others the weather. Some talked about the hard work or joked about their movements. Some were very serious and struggled to take an active part. It was all part and parcel of the programme and how the personalities in the group interacted with each other. They offered encouragement, even literary criticism. Discussion often continued after a poem was concluded, themes mentioned during its creation being taken up again.

I collected the poems, but no one else was really interested in the finished product. It was the process of working together that was important, the relating to each other, the themes we touched on, the wish to get a deeper understanding of each other. It was the attempt to reach each other’s Seeles that was important.
Some poems from the group expressed the joy at the coming of spring and being able to sit outside again after a long winter, some were full of woes and sorrow, some were just fun.
The one below is one of only three that actually mentioned Conductive Education. I have translated it just as Andrew Sutton translated the poem in his Mayday blog , literally and in prose. I agree with him that this is the ideal way, so that readers can make up their own minds about what was meant.

Tunnels have something positive, there is a light waiting at the end. To be close has not necessarily got something to do with distance.

Here we sit in the circle, and we say with one voice do I get to come to word or to bring my thoughts to an opinion? So that is that. Jabba dabba do Günther what do you say? The therapy, it was for some a torment today.
Susie says “I am sorry, but through it we can go far”. Next week it will be better; then we will have better weather.
Conductive Education' it is important to this discussion that one must say just once that taking part requires a lot of courage.
Left leg to right nose, right ear to left heel. There may not be a single rabbit that can do that, but never say that you will never achieve it.
When the hard work is over and the conductors say we can drive home there is no moaning and no pain, especially when they also say “Now for some tea”.
I can look at this poem and I can visualise the setting in which is was created. I can guess at which group members said what and I can see how the style reflects how each one of them lives with their condition: living each day for today, to the full and with pleasure, or maybe joking a way through life in order to live with the uncertainty of MS, maybe also living through some negative times, depressed and relying on the group for much-needed support. This and more would be expressed in our poems and later discussed as the tea was finished and the biscuits passed round!
It was and still is a part of our conductive programme, all of which is possible when the “conductive atmosphere” is just right.

“I'm not referring here to moving arms and legs (and to measuring this) but to the power to move people emotionally. It a common enough observation that those who experience Conductive Education are moved by what they have seen and done. At times too it has felt that the world might be changed. Oh, people, there really have been days when it has been bliss, very heaven, like that distant Mayday felt by Gyula Juház (as shows through even my prosaic translation).
But mere prose, the ’literature’ of Conductive Education rarely if ever puts this across to those who have never felt that way, even though feeling that way is the very essence of Conductive Education. Poetry is one way to convey this.”