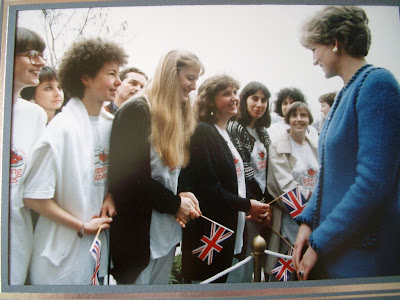 At the top of the paper it says “Could be sung to the tune of Twelve Days of Christmas”, so feel free to sing along!

I suspect that I had something to do with creating these as Téssek ladies are mentioned. I believe this term for the ladies in the streets selling everything under the sun, but especially flowers, was my invention, and the chocolate ice creams most certainly come from my Budapest flat mate.

The weekends in Vienna were the therapy of a few of the others. My weekend therapy was steaming at the Gellert Thermal Baths and afterwards hot chocolate and a brioche with the Sunday Times in a book shop.

Lovers snogging, that amused us all, they were abundant on every underground escalator and along the banks of the Danube (they probably had nowhere else to go).

Picture postcards could possibly be refering to the wonderful experience that I had at a postcard auction, bidding for a selection of postcards depicting trams and trains.

Dobos torta were the favourite of another of the students and I think we all carried at least one of these amazing creations home with us to the UK during the four years of our training.

Dogs barking, we all experienced, as we all had flats in Buda. The new houses up in the Buda Hills all had their guard dog and at around 10 p.m. one would start, then one by one all others joined in till by midnight there was a chorus of barking dogs.

Hours waiting, that is something that we all experienced. We had to enrol ourselves at so many offices it was unbelievable. In the first year we had to sign in at the police station and each year we had to get our residency permits. This took hours and one of us would join the queue at seven in the morning and we would relieve each other till we all returned when one had finally reached the front, sometimes then to be told that we had to join a different queue or go to a different office!

Filler were one hundredth of a Forint. They disappeared from circulation soon after we finished our training, in 1993. I kept a tin full of them beside the front door and my niece would take a handful out with her each day to give to the “beggars begging”.

Trams and their bells, were of course a novelty for us. I loved to travel over the Margaret Bridge at night on a bright yellow tram and see the illuminated Chain Bridge.

The strips of bus tickets were a new experience too as there were no bus conductors in Budapest! It took a while before we remembered to stamp our ticket for each journey. At that time it was still possible to play the dumb foreigner, as so few Hungarians spoke English, but things have changed and this year I found that ticket control on the underground was very strict for everyone.

Grumpy faces usually belonged to the people who had the reels of red tape. It was these grumpy faces who told us, as we neared the front of the queue after hours of waiting, that the red tape required us to go somewhere else, which we promptly did in a screeching taxi!

Buses heaving. This probably refers to their being full to overflowing, struggling up the Buda hills while puffing out their poisonous gases. This was especially dangerous when I was struggling up the hill behind a bus, on my bike! (I took to wearing a mask as cyclists in China do).

I never personally experienced a waiter fiddling, only the gypsy violinists serenading the guests. I did however see pockets being picked in Vaci Utca and frequent chases after the thief along the banks of the Danube .

A more detailed account of student days in Budapest will be posted one day. It has to stay in the queue with the many others ideas and notes waiting to be typed up. This is just a starter for ten, a glimpse into the life of the British students training to be conductors in Budapest, 1989-1993.

Three groups of British students went to Budapest from the Foundation for Conductive Education to study at the Petö Institute between 1987 and 1993.

Princess Diana was Patron of the Foundation from December 1990 to July 1996 . Eight of the foundation's trainee students can be see on the photograph talking to Princess Diana after her visit to the Petö Institute in March 1992. Her visit lifted the hearts of the students, children and parents of all nationalities, not just those of the flag-waving Brits pictured here.
Posted by Susie Mallett at 23:18

Our daughter attended the Peto Institute in the early 90s.

On one startling occasion, my wife and I were walking alongside Varosmajor when a youngish man accosted us, told us he as a poet, and begged us to buy a poem. I do not recall how much we gave him, nor the words of the poem, though we still have it tucked away somewhere.

Where else than Budapest, I wonder, might one buy a poem in the street from its author?

Poems and too much Dobos torta. Happy days.