"It is the Medikament" 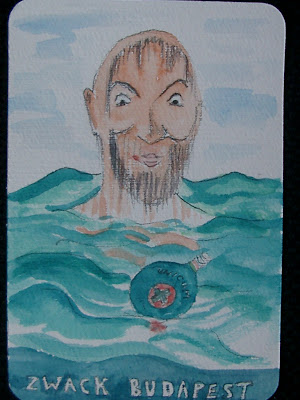 When discussing Conductive Education with almost anyone who knew Mária Hári, specially with conductors who were taught by her, it is inevitable that the following sentence will come up at least once in the conversation: “As Hári Mária said……”

Last week, fallen ill in Budapest, once again the words of Mária Hári were recalled, in a desperate attempt to recover and carry on holidaying. Sitting in my hotel room, all shops shut on Easter Monday so no hope of purchasing any Vick Vapour Rub, I saw staring me in the face the bottle of Unicum which I had actually bought as a present for someone.

Mária Hári had said of it: “It is the medikament”. I was sure I didn’t like the taste of its herb and caramel bitters, but I had nothing to loose and after all I had already learnt so much from this lady I was sure she probably knew what she was talking about. It really would be a last resort but I thought I should have a go.

My first thought was I don’t have to actually drink it, I can use it externally like Vick Vapour Rub, treat the whole body and not just a part, as Dr Petö wrote often enough in his book Unfug der Krankheit-Triumph Der Heilkunst. This is what I proceeded to do, working from the outside inwards.

Soon the warming properties were felt and the smell drifting into my nose was not as unpleasant as I remembered. Maybe it was time to test its internal healing properties too. This was beginning to seem more and more like one of the "cures" from Petö's book.

As I took my first sip childhood memories came flooding back, my immediate association being Owbridges Cough Medicine which I had loved as a child. It had been known for me to feign illness in order to be given a spoonful of Owbridges, sometimes I even secretly took an extra swig when no one was looking. Now as an adult and with a bottle of Unicum I had no need for secret swigs, I could drink it from a glass, which I proceeded to do.

The first glass was not so nice, the second was a bit better, the third was rather good. After that...

Thanks to Dr Hári and medikament, I had a good night's sleep with no coughing, and my Seele was soaring again in Budapest.

I remember exactly when I first encountered Zwack Unicum, it was in a restaurant in Budapest, in a side street, in a pince (basement) bar somewhere behind the main post office in Moszkva Tér, on October 4th 1989. I had been in Budapest for only two or three weeks, everything was new but the city's Seele was already doing its work. On this first occasion I smelt the Unicum and then left it well alone, despite going on to buy many bottles as present for friends in the UK over the following years.

I loved the form of the green bomb-shaped bottles with the medicinal style red/gold cross on the label and the crazy vízesember (wet man) adverts which were to be seen all over the city in 1989, but none of this tempted me to drink it!

18 years after my first encounter it took the words of Dr Hári to tempt me in my the hour of need. I thoroughly recommend the Unicum treatment to anyone in need of a quick cold cure and with a childhood liking for Owbridges. It didn't actually work long term, but it helped take my mind off how awful I felt that evening and then carried me through the next day when I had an important meeting at the Peto Institute.

I'm back in Germany now and on penicillin, but my eye keeps wandering back to the bottle that I brought back as a present. I wonder what Dr Hári would recommend I should do.

This advertising campaign with the vízesember (wet man) poster was so prominent in the city at that time because in 1989 Zwack Unicum Budapest Kft. was re-established.