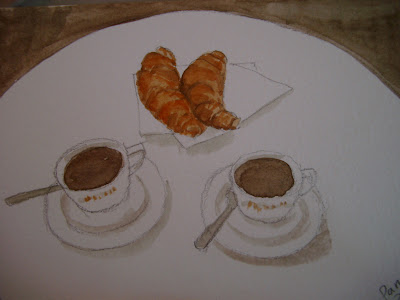 I don’t call this post Conductive Cooking only because when I cook with my clients it incorporates a standing programme, a sitting programme, a hand programme, maths, chemistry and whatever else cooking entails.
Of course the cooking includes all of the above and more, but this story about conductive cooking is as much about how we came to be cooking in the first place as it is about the actual physical activity of cooking.

I call it Conductive Cooking because of the conductive process which took place before the cooking could even happen, including the psychological changes which took place over the years, which are so necessary for this situation to have come about in the first place.

I have a group of CP adults, they have been coming to weekly CE sessions after their work for many years now. During this time they have developed into more and more independent young people. They are very much aware that their parents don’t get any younger and therefore will not always be there to give assistance. This group is highly motivated, with a central aim of reducing their dependency on others.

I enjoyed working in the Petö Institute in the “Workers' Group” mainly because of the group "Seele". I think that my evening group too has something of this atmosphere, it is very different to that of groups which take place during the day, during working hours!
"After Hours" groups are more like an evening class, not exactly a social gathering, but a coming together to learn something and at the same time meeting people and sharing experiences. We have all already worked a full day when we meet, then we have another two hours to get through. We are tired but none the less highly motivated. We have fun, we laugh a lot, we relax, we listen to classical music, we discuss everything under the sun and still seem to have time for a task series or two. All of it very conductive. All very much about living.

Now back to the cooking.

Last week I had an organisational problem, which meant starting the group 30 minutes later than ususal.
This was OK with all except one man who needed help with eating his evening meal and the late start would mean no help would be available.

Mária Hári often mentioned to us during our training how Conductive Education leads to spontaneity, activity and problem-solving and here I was on this occasion experiencing them all in a flash, in the space of less than 5 minutes.
A second member of the group, usually with a reserved manner, suddenly spoke up. Quickly and efficiently she solved the problem by suggesting that we cook that evening for her birthday, which would mean we could then eat in the group.
Between them, in the following five minutes they had the menu planned and the shopping and guest lists compiled.
A few years ago the woman who initiated this would not and could not have said 'Boo' to a goose, let alone have solved our dilemma!

Of course on the actual evening we did stand up to roll the pizza dough, we sat to chop the tomatoes finely, we walked to set the table and we bent down to reach in the oven, but the first conductive process took place in the weeks and years before, culminating in this perfect managing by the group of an unusual situation.

This is what I mean by Conductive Cooking.
The situation described demonstrates how it is the process of changes in the personality taking place through Conductive Education, parallel to the physical changes, that makes it possible for Mária Hári's spontaneity, activity, problem-solving and, of course, the team work to take place.
The pizza, by the way, tasted wonderful!
Posted by Susie Mallett at 17:53