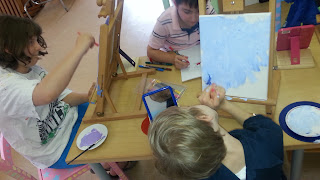 I decided that I would give the school children as jolly a time as possible while they were with me during their school holidays. They come all year round, two or three times a week. It is important that, when they give up a few days of their precious school holidays, there should be a holiday atmosphere in the group. There were frozen fruit juice lollies every day, games like charades and pin-the-tail-on-the-donkey that are usually kept for birthdays, and choice of creative activities.

I asked the children to think about what they would like to do each day so I could prepare anything that we would need beforehand. They are so used to doing arty-crafty activities with me that they always have lot of ideas.

Painting was, as always, one of their requests so as we need some paintings to decorate the stairwell this seemed to be as a good time as any to create them on canvas.

I brought armfuls of canvases up from the cellar, in all shapes and sizes. I brought the biggest that I have –  about 100cm x 70cm, that would be suitable for a group painting like those that we have already made together – and I brought the smallest too, that are about 20cm x 20cm, these are good for pictures of a similar theme that we can then hang together. I have canvas in many sizes in between these, including a pile 25cms x 35cms, that are perfect for self portraits. 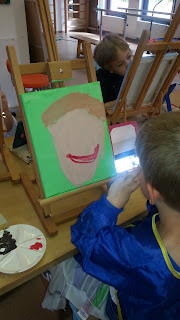 Although the choice to paint was no surprise, I was surprised when all four children decided to paint self-portraits and was happy to see them getting themselves organised at the table. Quick as a flash they were all kitted out in overalls, despite the 35 degrees outside.

The children ripped the plastic packaging off the canvases, set them up on their easels, helping each other along the way, and were demanding the first colours for the background.

I had planned on getting out my art books and showing them portrait paintings by Modigliani, Picasso, Van Gogh and more, but there was no time for this. Once set up with an easel, a mirror, a choice of brushes and a supply of paints they were impatient to get started, they did not want to know how others did it a hundred years ago, they knew how they wanted to do it now.

I decided to use the momentum and their enthusiasm to let them paint, I can show them how the others did it another time, and perhaps they will be interested enough then to make a second, third or even forth attempt  in the style of the other artists. 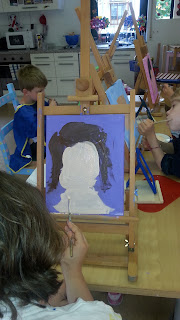 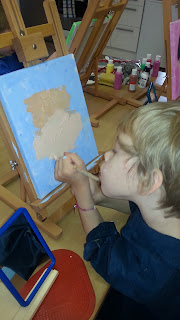 The children asked me for their colours and decided how much to mix of each to achieve the desired hair colour or skin tone, they then passed colours around the table as was needed, mixing as they went. As I was alone with four, and later five, children I dealt with squeezing out the paints and cleaning up the smudges myself. Usually the children wish to do all of these themselves too but they agreed just this once to let me do it so that the afternoon could flow as smoothly as it did. 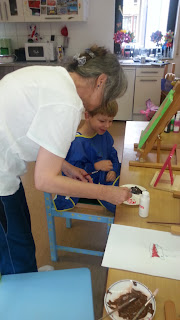 Even I could not believe how quiet it was and how concentrated they all were peering into their mirrors, deciding how to mix the right colours for hair, skin, eyes and lips and deciding on form and shapes.

Having the easels really is something special. The children paint so differently when they use them and painting on canvas makes them feel like proper artists too.

I had no need to repeat the instruction, that if they are painting a portrait of their face, then it should fill almost the whole canvas. I was surprised how much these children have developed and they were all capable of judging the use of the blank space. They judged the position of eyes, nose, ears and mouth precisely, and all their positions in relation to each other. The colour, the length and shape of their hair was also quite accurate.

I could go into the typical diagnosis/image relationships but that is not important here. 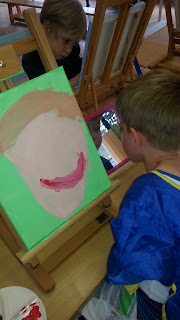 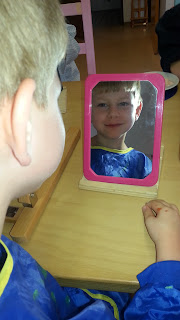 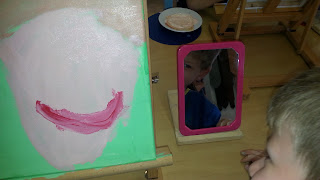 Good for the soul of the artist

I want here to illustrate here how these children, when given an easel a canvas and a private space – none of them could see each other’s work – they were transformed into serious artists, creating serious works of art. This atmosphere remained throughout the production period and throughout the critique in which they all said want they thought about each other’s work, discussing whether a likeness had been caught or whether the colours and forms were accurate; and it continued till the picture-taking of the artists posing beside their paintings. 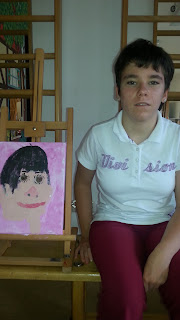 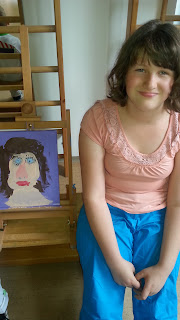 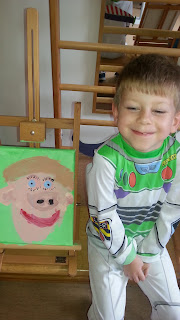 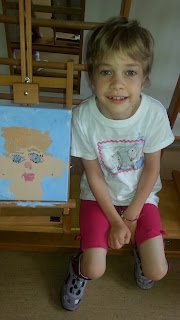 And good for the body

Of course the reason that I had used a donation to buy the easels and canvases was precisely this, I wanted to create an atmosphere of concentration, create the feeling of doing something well, professionally and with care. I also wanted to give the children a chance of painting upright so that they could actually see the images that they produce and not see them in the elongated form that they have when flat on the table.

There are also all the physical advantages of using an easel – standing to paint or sitting up straight, lifting the head and stretching the arm to reach the easel. Add all of this to the feeling of being a real artist and it makes for a good recipe for success.

Those children who can stand or sit well can use long paintbrushes held at a distance from their bodies and by doing so have an even better chance to view what they are creating – and at the same time learn balance, and exact fine and gross motor-movements.

Thank you for giving me the pleasure of the afternoon

This group of children, who are between seven and fourteen years of age, were such pleasure to paint with.

They were so engrossed in their work and so capable, so independent, that I was able to take time to step back and watch them, to enjoy the moment, and of course, to take a lovely series of photographs to accompany my writing.

What impressed me most was that, while none of the children could see another child’s work, they were concentrating so hard. None of them said ‘I cannot do this or that’, although they did ask me for advice on how to make eyes-lashes and earrings (a fork and the end of a paint brush were used for these tricky bits). They were mostly confident in their own skills, not distracted and only at the end interested to see what their friends had produced. They wanted to get on with it all on their own. 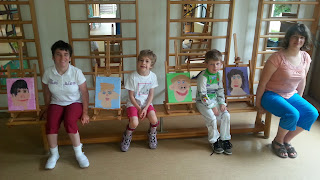 Taking a look at what we have learnt

As so often happens in the holidays I looked on in wonder at what these children have learnt right under my own nose without my really noticing. It often takes the holiday to bring it out. It is the time when we decide to have even more fun than usual, we have the time to take it easy, relax and show each other what we can do, and we enjoy it.

Already during this first week of the holiday we have painted, played party games and made rum and coconut balls. I look forward to next week when we will produce a group painting, bake bread rolls, and play a few more party games before the real holiday begins. After the end of next week there will be no more Pető for these mainstream school-children until September, and after only a few more sessions with the adults I will also take a break from the practical work. There is however still a lot of Pető-related stuff for me to do, with papers already in my hand to translate for the World Congress, a book to be completed, a poster and two papers to write for myself, a book to edit for someone else and a hundred and one unfinished postings to write.

I will be busy, but I hope still to have time potter in my favourite garden.