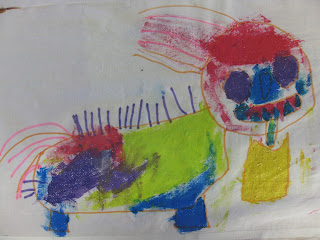 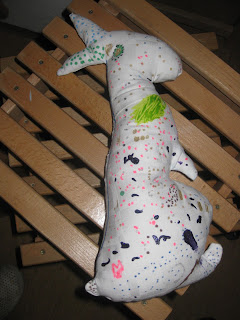 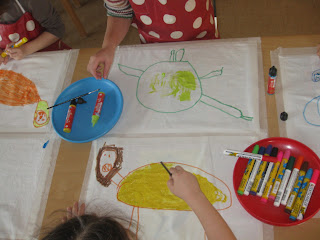 I had some lovely hours one morning in December and some more that afternoon.

It was the lovely afternoon hours that I had originally sat down to write about but before putting pen to paper I suddenly realised that the whole day had been rather good. I shall stick with my nice afternoon-hours story to start with.

I think that I have written before about my making stuffed-toys project, today it continued in leaps and bounds.

Four pre-school children came to paint animals with me. They want to have the finished articles scattered on the seats in the parents' room in their new conductive Kindergarten, which is almost ready to move into. The children are looking forward to this move but with some apprehension too. I am pleased that they will at last have a lovely new and bigger space to work and play in, but I am not happy to see them go. My room for conductive groups does not, unfortunately, go with them.

I am staying put and after the move I will not be able even to watch the children playing outside any more from my window. Yes, you could say I am more than a little bit sad at the prospect of the children being only twenty yards away, knowing that they will not be popping in to see me in the same way as they have been for the past five years, bringing me a baked apple, a homemade biscuit or a freshly painted picture to see.

Singing while we work

As my four artists produced an amazing nine animals between them they chatted and sang to their hearts’ content – Oh, how lovely it is that we have an integrated Kindergarten!

While they sang about the Christmas bakery, making up their own words to a popular children’s song, singing about what we were doing and naming those who were working around the table, we painted and painted and painted. It seemed like we painted for ages but it was in fact only sixty minutes.

In their songs the children moved from the bakery to the artist’s studio, to the garden and eventually back to the bakery. Whilst catching their breath between verses they chatted with me while I helped to squeeze the nearly empty tubes, washed brushes and at the same time felt almost redundant. These five-year-olds were so jolly, so confident and oh so very independent. They oozed confidence in carrying out their arty work, not once asking for artistic advice, only for help to squeeze out the last drops of yellow.

(Yellow is always the first colour to run out in our paint-boxes, probably because always lots of sunshine and also the odd lion, are painted. It could be black that would run out first if I ever bought any. I was asked for black several times today, but I had to let the children know that here, we always mix the darkest colour possible ourselves from different amounts of many of the other colours.

So, while it was decided that the horse's hooves could in fact be painted with glittery purple, just as though he had nail varnish on, plans were hatched.

We made plans for the most amazing inventions imaginable. The motivation for our Heath Robinson inventions was our wish to share each other’s company after the move –

One little boy had asked – “Susie are you moving with us?”

I answered that unfortunately I have to stay put, but I told them all that we could still visit each other. I explained that we would not be too far away from each other and the children would only have to put on a coat and change out of their slippers to nip across to me, unless of course we came up with something else!

The children did not need anymore of an invitation to put on their thinking caps. With all thoughts of singing about the Christmas bakery forgotten they invented a fantasy slide to bring them to my room. When they mentioned it I first envisaged a slide like in our playground but I soon realised that these little ones had set their sights on something grander. Something more like those that can be found at a swimming pool would certainly be more suitable for their purpose as the children between them had decided that they would like to arrive in a side window which would mean travelling down many twists and loops in order to arrive there. With the slide's construction discussed and solutions found on how to visit me the questions then came about how they would get back.

At one point one of the children forlornly said to the creative young man who had initiated our Heath Robinson conversation – “We will only be here till the summer so do we really need that slide?”

“Off course we do” – was the general consensus but the problem still was what would the children do about getting back again?

Landing on their feet

I offered to build them a rocket but this was quickly rejected in favour of a human cannon that would shoot them right through the roof and back to their Kindergarten. I was so impressed, especially by the demonstration of how they would land safely on their feet. All this imagining, inventing and adventure was taking place at the same time as we were producing lots of lovely pictures that we will turn into stuffed-animal cushions!

It is important that these children have the link that our creative work forms, a link that bridges the gap between the new building and the old. Our project, painting, sewing and stuffing toys, will ease them through the changes and retain a link to their “old” life and experiences, linking them to their old environment so that with or without slides, rockets or human cannons they will still continue to visit and spend a creative hour or so with me!

The next big step in these children's upbringing will be eased, also a vital process in upbringing.

Welcome back to the world of Cyberspace, with your vivid and sometimes thought-provoking reports of your conductive practice.

Never mind what they have me asking about the practice, they also set me wondering why those who proclaim themselves so eager to 'research Conductive Education' do not start by investigating some of the processes at work recounted here in this little vignette – or the thousands of never-described such processes manifest in the practice of so many conductors. So many snippets, generating so many hypotheses, such fresh generalisations, and likely some potentially very interesting new conclusions.

Keep up your good work.I do hope that 2013 will find others to join you in sharing their experience as openly as you do and publishing the humane side of CE.