…at first we played at being ghosts 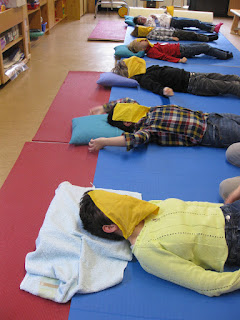 and then we made witches! 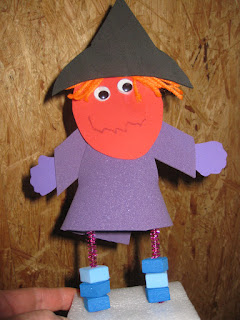 For the first time in a long time we have had a group of older children that filled the room!

Seven 6- to 13-year-olds joined us for Halloween, in the middle of the school half-term holiday.

With two conductors and seven children it was such a joy. This work with my colleague and the children worked wonderfully. We even had the oldest child in the integrative Kindergarten join us and he behaved like the seven-year-old that he nearly is, instead of the four-year-old that he has not been for a long time!

Because our school children all have other commitments we rarely see all of them on the same day. They pick two or three days a week to join the after-school group. Days that fit in with other activities such as horse-riding, music lessons, extra language lessons, football training, meeting friends, and getting homework done!

It was really lovely for all of us that they were all there at the same time. The group dynamics were very diffeent, those who are usually dominate in the small groups were unusually quiet and vice-versa. I think some of them realised how well they were doing in comparison to some of their peers when they were before quite disappointed sometimes with their achievements. Some of the children rarely meet each other so this was the opportunity to renew friendships.

What I learnt most from the experience was how independent they have all become. I walked up and down the row for the lying programme while Évi helped the only child who needed someone beside her all the time. Usually I stay beside two children and Évi beside another two, but not on Halloween! They were all so able and showed us what they could do.

While playing 'ghost' we were trying to blow the yellow hankerchiefs in the air and later we learnt lots of words associated with Halloween in English, German and Hungarian. There are two Hungarians in the group, there was also a Turkish boy and me! Next time perhaps we will learn the words for witch, ghosts and pumpkin in Turkish, we could not quite get it out of the six-year-old boy this time!

What I enjoyed most was that I did not need to help too much with my hands, but I had to help a lot with praise and jokes and fun, with that motivation the children did almost everything entirely alone.

Thanks to them all for sharing this day with us and showing us how much they have learnt and how well they can work as a team.

All of the school children did not decide to join us on everyday of the school holiday. On some days we had small groups which were also ideal opportunities for those children who need just a little bit more help in their lives to receive it.

It also gave us the opportunity to invite children to the group who have been away for a while since starting school and wish to join our after-school group.

Individual sessions within the groups

One of the Mums heard that we wanted to learn to sew with the older children and one morning last week she arrived with a sewing machine for us. She had tried out lots of different models, both for children and adults and decided on the children’s machine seen in the photos. It certainly is the best choice as it is sturdy, can work on quite thick material and has a limited speed.

However hard the children put their foot down on the pedal it only goes at a walking pace which allows them the time to steer the fabric through the machine.

When I had the time I sat with the children individually so they could sew the stuffed toys that we are all making for the summer fete. 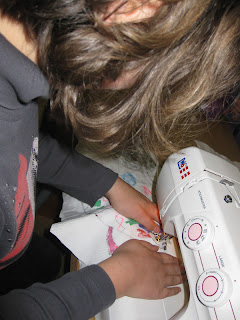 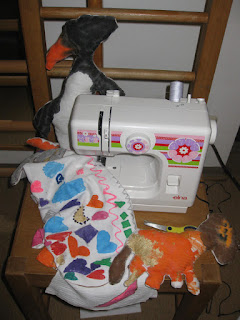 Some of the integrative Kindergarten children visited us and sewed their own waterproof aprons. 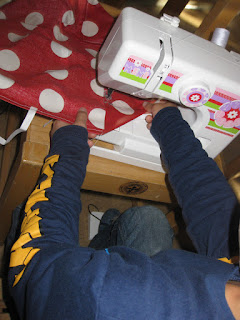 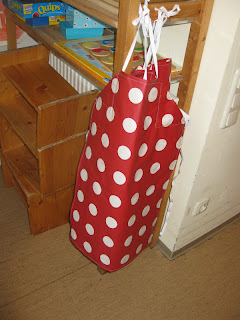 Many thanks to the thoughtful mum for doing the research and for turning up out of the blue with the lovely sewing machine for us.